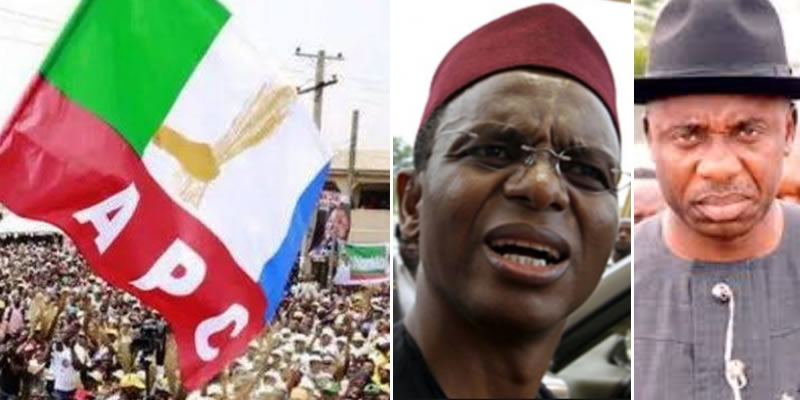 Chairman of the All Progressives Congress APC in Ondo state, Olu Olatuja has accused the Chairman of the Nigerian Governors’ Forum and Governor of Ekiti State, Dr Kayode Fayemi, his counterpart in Kaduna state, Malam Nasir El-Rufai and the Minister of Transportation, Rotimi Amaechi of being responsible and fueling the intra-party crisis in Ondo state.

Olatuja made the allegation on Thursday while addressing journalists at the national secretariat of the APC in Abuja.

This was as he expressed concerns that 10 of the 12 aspirants who have picked the expression of interest and nomination forms are likely to boycott the forthcoming governorship primary election of the party due to the inability of the national leadership to sanction the state governor, Rotimi Akeredolu and his allies for various infringements on the party constitution.

He called for the adoption of direct method of voting during the July 20 governorship primary election of the party in the state, arguing that there are two contentious delegates list, a development which could threaten any possible victory of the party at the main election.

“We need to call the attention of National Leaders of our party to call the Governor of Ekiti State, Dr John Kayode Fayemi to order to avoid disgrace and embarrassment that may arise from abuse of his office as Chairman Nigeria Governors Forum. He and his cohorts should desist from facilitating undemocratic process, while trying to impose the incumbent Governor, Arakunrin Rotimi Odunayo Akeredolu on the APC by pushing for an indirect primary model which is grossly inequitable and inimical to the success of our party in tgr general election coming up on the 10th October 2020. He should note that Ondo State is not an appendage of Ekiti State and such he should stop meddling with the political affairs of Ondo State”, he stated.

Pressed to mention those working in cahoots with Fayemi, the factional party chairman simply listed Malam El-Rufai and Hon. Amaechi.

He said he had earlier spoken with the public in Akure the state capital but decided to also address the media at the national secretariat of the party so that the party leaders would not claim ignorance of current developments in the party in Ondo state.

Olatuja added that his faction had recently written a congratulatory letter to the newly constituted caretaker committee of the party in which it raised several issues that could impact negatively on the chances of the APC retaining the state.

He said; “In the said letter of congratulation, we equally intimated the current leadership of the party of petitions before the recently dissolved National Working Committee (NWC) and the pending suits No. FHC/AK/CS/10/2019 challenging the process and the outcome of congresses held by the faction of the State Executive Committee of APC in Ondo State led by Mr. Ade Adetimehin from Ward level to the State for non compliance substantially with the congress guidelines as laid down by our great party thereby making our faction the authentic and validly constituted State Executive Committee of the party in substantial compliance with congress procedures.

“In addition, we also pointed out our observation in the letter written by the current leadership of the party dated 25th June, 2020 with ref. No. APC/NHDO/19/013 to the INEC notifying them of the forthcoming Governorship primary election of our party fixed for the 20th, July 2020, in Ondo State. It is however, our observation that the mode of the primary election to be adopted was not stated or communicated to assist their preparation for the monitoring of the exercise as required by the Electoral Act 2010 as amended.

We are however, despite the above observation aware of the speculation in the media insinuating an indirect mode of primary for Ondo state although it was not contained in the official letter dated 25th of June to the INEC.

We find it compelling to assist the decision of current leaders at the national level by furnishing them with the details of events as it affects the Ward, Local and State Executives and delegate lists of APC in Ondo State. That considering the pending suit before the Federal High Court Akure Division and our letter dated 26th June, 2020 which was served on the Chairman and other members of the caretaker committees on 30th June, 2020 drawing the attention of the caretaker committee to this suit and it implications on the need to conduct a valid and successful Governorship Party Primary and the desire to avert the Zamfara and River State episode / bitter pill.

“We urge that premised on the situation at hand in Ondo State as highlighted above, that the option of Direct Primary be considered and must adopted in the interest of equity, fairness and justice. So that the outcome of the pending suit No. FHC/AK/CS/10/2019 would not affect the validity of the Governorship Primary to be conducted on the 20th July, 2020. The adjournment date for the above mentioned suit is 22nd July, 2020 at the Federal High Court, Akure, Ondo State.

“Another issue raised in the congratulatory letter to the caretaker committee and in the press briefing held at Akure on Tuesday was the Anti – Party activities of our Governor, His Excellency Oluwarotimi Odunayo Akeredolu SAN and Mr. Ade Adetimehin led Executives in 2019 general elections when they vigorously campaigned and mobilized for Action Alliance (AA) candidates against the candidates of our great party APC resulting in the loss of Presidential, Senatorial and House of Representatives Seats; wherein we lost 2 Senatorial seats and 5 House of Representatives seats to the opposition parties.

“It is on record that the logistics sent twice meant for the support of our party and candidates in the 2019 Presidential and National Assembly elections were received and diverted by the governor through Mr. Ade Adetimehin led executives to support their preferred candidates contesting on the platform of Action Alliance (AA) against the candidates of our party. Thereby, denying APC candidates of benefiting from the logistics provided by the leadership of our party. Sweeping these allegations under Carpet by our National leaders without approprate sanction is an indication of disrespect to the party constitution. This might also lead to boycotting of the proposed Governorship primary election by some aspirants and is going to be an authorization for further anti – party activities in Ondo State.

“It should be noted, however, that as at today, 12 aspirants have collected their Expression of Interest and Nomination Forms and of which nine / ten aspirants out of 12 acknowledged our leadership and are working directly with us as the authentic APC Executive in Ondo State. It is also important to note that five of these aspirants came from Owo local government area where the incumbent Governor hails from. His moving round to influence the disqualification of his major challengers is uncovered and screening committee should note this”, he added.