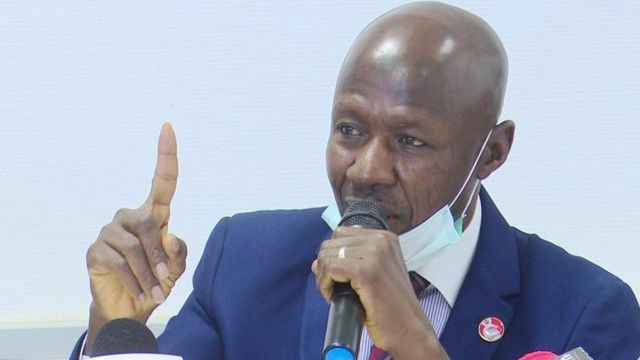 Ibrahim Magu, the suspended acting chairman of the Economic and Financial Crimes Commission (EFCC), who is facing trial before the presidential investigation panel over allegations of corruption levelled against him has reportedly shunned the cell of the Force Criminal Investigations Department (FCID), Vanguard reports.

WITHIN NIGERIA gathered that the embattled former EFCC boss has now turned the mosque in the premises of the police headquarters to his abode where he has spent his fourth night.

The police management team was said to have abandoned him to his fate to carry his own cross following his refusal to identify with the police hierarchy while his reign as the commission’s boss lasted.

Vanguard noted that the information from the FCID, revealed that Magu now spends his night inside a mosque at zone 10 office of FCID, Abuja where he was ordered to be detained pending the outcome of his trial.

Sources said that though he was supposed to be kept inside the cell at the zone 10 office of FCID, Abuja, he normally spends hours behind the counter in front of the cell and after appearing at presidential panel headed by the former president of the Court of Appeal, Justice Ayo Salami, he would be brought back and later taken to the mosque midnight where he slept up till Thursday, July 9.

It was gathered that FCID, zone 10, has been well fortified since Magu was detained there and extra efforts have been made to scrutinize both officers and men working there including visitors.

Furthermore, it was gathered that the police management team met early on Friday, July 10, and took far-reaching decisions over Magus’s trial.

Police sources, according to the report, said the management team decided that the embattled commissioner of police should be made to carry his cross based on the fact that while he was presiding over EFCC, he deliberately failed to respect senior police officers and never attended senior officers meetings chaired by the Inspector General of Police, Adamu Muhammed.

President Muhammadu Buhari has reportedly warned serving ministers, senior police officers and top government officials not to be seen offering any assistance over the case.