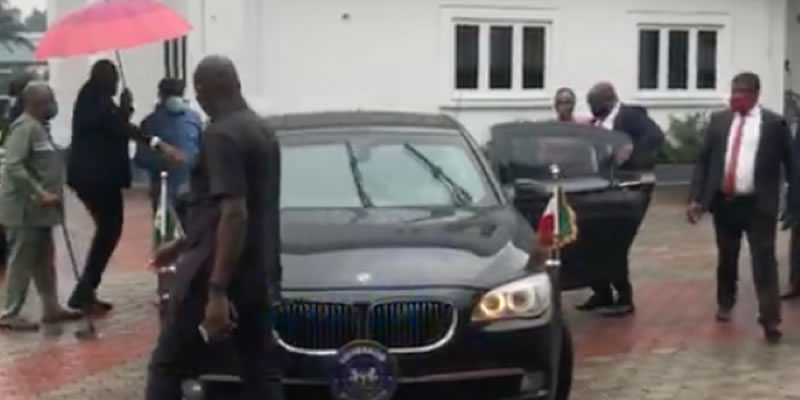 Rivers State Governor, Nyesom Wike has reportedly stormed the residence of a former Managing Director of the Niger Delta Development Commission (NDDC), Joy Nunieh and he has taken her to the Government House.

WITHIN NIGERIA learnt that the Rivers state governor, Wike arrived the house which was surrounded by over 15 armed policemen in the morning.

According to reports, Wike bulldozed his way into the building and zoomed off with the embattled ex-NDDC managing director.

Sources said the Governor relocated Nunieh, who was supposed to be in Abuja to testify before the ad-hoc committee of the House of Representatives investigating alleged corruption in the NDDC to the Government House in Port Harourt.

WITHIN NIGERIA earlier reported that ahead of the appearance of ex-NDDC MD, Joy Nunieh before a House Committee on the ongoing probe of the commission, some yet-to-be identified policemen have allegedly been spotted at the house of the former Acting Managing Director of the Niger Delta Development Commission.

WITHIN NIGERIA learnt that the ex-NDDC MD, Joy Nunieh is assigned to testify before a House of Reps panel today July 16 as part of the ongoing probe of NDDC.

Akpabio and Nunieh have been at loggerheads which came to the fore when they appeared before the senate ad hoc panel investigating the alleged mismanagement of N40 billion by the interim management committee (IMC) of the NDDC.

At the hearing, Akpabio said he did not know the expenditure of the NDDC under Nunieh because she refused to give him briefings, but she claimed this is false.

She said the minister engineered her removal for failing to dance to his tunes and made several allegations against him, including sexual harassment, budget padding and fraud.

In the heat of their disagreement and the theatrics of the NDDC probe, the Rivers state government said nothing must happen to Nunieh.

“We wish to state that while we are not interested in identifying with the present unfolding drama in the NDDC, we will not however fail to protect our daughter from actual harm or perceived danger,” Paul Nsirim, the state commissioner for information, had said.