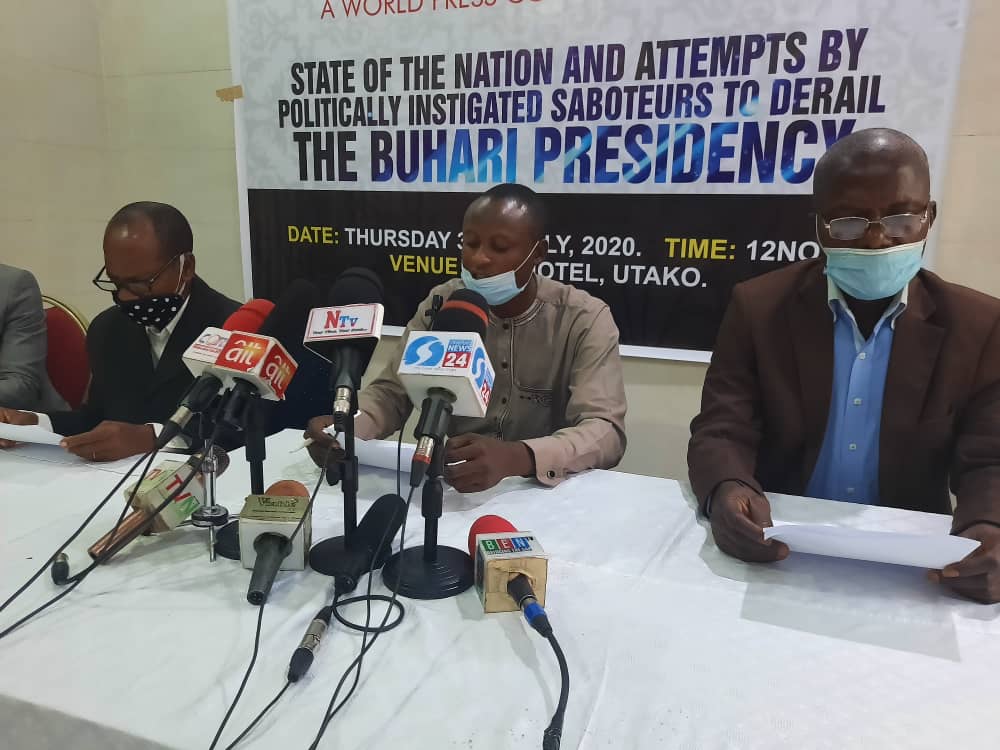 Some legal practitioners have pledged to defend Nigeria’s constitution and sovereignty for free against persons attempting to undermine the powers of the President and efforts of the Service Chiefs.

The groups, under the aegis of Patriotic Nigerian Lawyers (PNL) and Concerned Citizens made this vow on Thursday at a World Press Conference in Abuja, warning paid sabotuers to stop taking Nigeria for a ride.

Speaking at the press conference on behalf of the groups, PNL’s Executive Secretary, Barrister Abdulmalik Alfa, described the suit by the spokesperson of the Coalition of United Political Parties (CUPP) Ikenga Ugochinyere calling for the sack of the Service Chiefs as an “exercise in futility”.

He added that Ugochinyere’s actions isn’t surprising owing to his known alliance with the opposition Peoples Democratic Party (PDP) and utter desperation with other “enemies” of the country.

The legal practioners, however, welcomed the CUPP spokesperson to meet them in court and assured that neither Mr. President nor the Security Chiefs would be distracted by his paymasters’ antics.

They also vowed to rise up in “defence of the letters of the 1999 Constitution (as amended) and other laws of the land, defend our selfless men and women who on daily basis risk their life whilst we are asleep”. 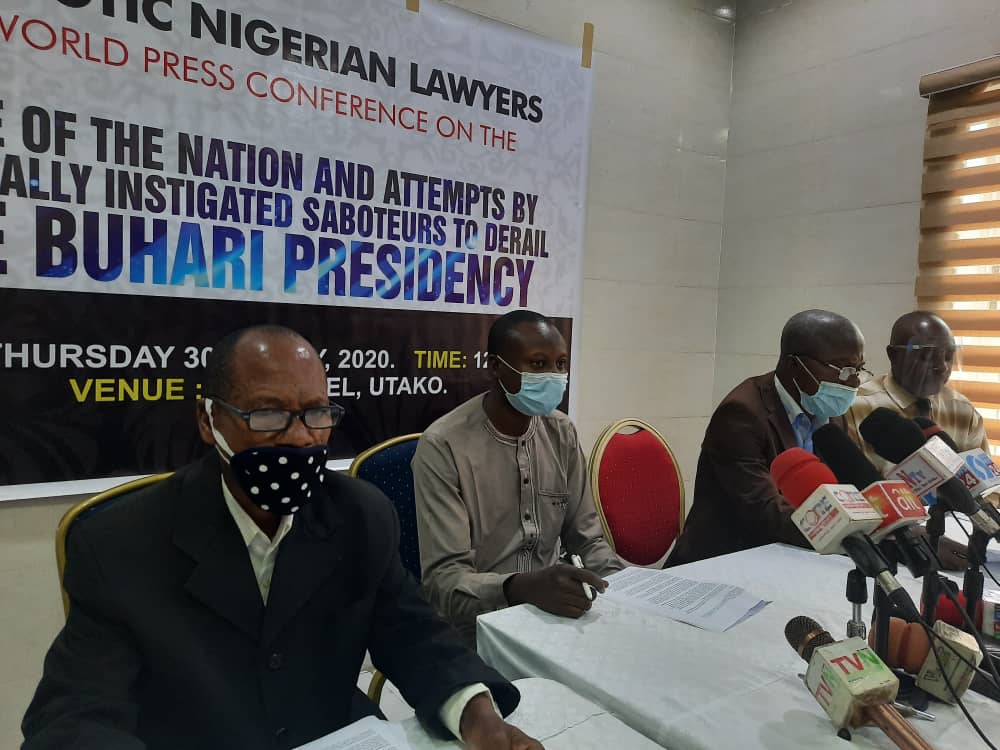 Gentlemen of the press, we welcome you to this press conference and we thank you for coming. We are glad that you honored our invitation to be here today because of the magnitude of the matter we are raising for the attention of Nigerians.

You must be aware by now that one Ikenga Ugochinyere, speaking for and on behalf of the Coalition of United Political Parties (CUPP), ostensibly to dramatize the failed suit that the coalition filed at the Federal High Court, Abuja. The suit, which is practically a futile attempt at judicial spearfishing, is seeking to coerce President Muhammadu Buhari to sack his Military Service Chiefs. The suit therefore joined he Chief of Defence Staff (CDS), Gen. Abayomi Olonisakin; Chief of Army Staff (COAS), Lt.-Gen. Tukur Buratai; his Air Force and Navy counterparts, Air Marshal Sadique Abubakar; and Vice Admiral Ibok Ekwe Ibas as respondents.

In taking this step, we sense confusion on the part of CUPP. They apparently decided to develop selective amnesia about the extent of powers the Constitution of the Federal Republic of Nigeria (as amended). Had they as much as educate themselves to the provisions of the grand norm they would have realized that their journey to the Federal High Court is an exercise in futility since they are in essence asking the court to usurp the roles of the legislature by rewriting the law on the bases of the declarations they are asking the court to make.

We beg to deviate from the processes of the court and address the other serial deficits that is around the character running CUPP even though the designation he awarded himself is that of a spokesperson, ostensibly to cater for his attention seeking disposition.

If Ugochinyere’s case, which he presents as CUPP’s case has a plank to stand on, why does he have to pass a vote of confidence on President Buhari and the Service Chiefs? We see this action as constituting himself into a parallel court and his organization into an arm of government. Passing a vote of no confidence on them is akin to him saying he has sacked them; which we know he has no powers to do.

The bizarre became ridiculous when the same Ugochinyere/CUPP that has approached the court for various declarations and a directive admitted that President is constitutionally empowered to hire and fire security heads. The expectation is that such admission will provoke profound contrition that should have made Ugochinyere retrace his steps. On the contrary, he persisted in sliding down the wrong path by exposing the political motivation for his actions by a jaundiced pronouncement that men who have given their best to the country were failures.

It is pertinent to question the CUPP’s spokesperson’s sense of patriotism considering his decision to further congest already choked dockets of the courts with his spurious suit. Gentlemen of the press, you can imagine how people like this man regularly compound the plight of awaiting trial inmates by slowing down court processes by matters that will not entertain even village union meetings. What is playing out here is an attempt to hamper Nigeria’s democracy by dragging the judiciary into the government baiting that has become the staple of the opposition.

In this regard, we want to refresh the minds of Nigerians to the period preceding the 2019 General Elections and how the opposition at the time was angling for “alternate” routes to power. This gentleman calling for the heads of the Military Chiefs was in the thick of this alternate plot. Provoking security breaches, undermining the military and overwhelming the courts were among the strategies that the opposition reportedly planned at that time with some entities making references to plans A, B, C and D. Now that Ugochinyere, a well-known opposition factor in the 2019 Elections, is maligning the Service Chiefs perhaps Nigerians should be worried about the fate and safety of their democracy.

Whilst one can ignore Ugochinyere who is a known drug addict, his sponsors such as Dumebi Kachukwu, a businessman who allegedly aided American Congressman Jefferson to defraud Nigeria. He is also in cahoots with Uche Secondus of the PDP. These are known state enemies. These are people smarting from loss of access to the government of the day so we may not expend energy trying to understand the CUPP’s spokesman’s source of inspiration.

Patriotic Nigerian Lawyers assure Ugochinyere that Nigerians will meet him in court to ensure that neither Mr. President nor the Security Chiefs are distracted by the antics of his paymasters and will neither be stampeded by him.

Nigerians already know them him and his associates. The looters of Nigeria’s treasury have seen a pliant agent in Ugochinyere, who claims to be a lawyer but knows scant about Nigerian legal system and cannot be bothered to even understand judicial terms. If he knew, he would have been told that he who must come to equity must do so with clean hands.

He can be assured that very selfless and patriotic Nigerian lawyers will rise up in Defence of the letters of the 1999 Constitution (as amended) and other laws of the land to defend our selfless men and women who on daily basis risk their life whilst we are asleep.