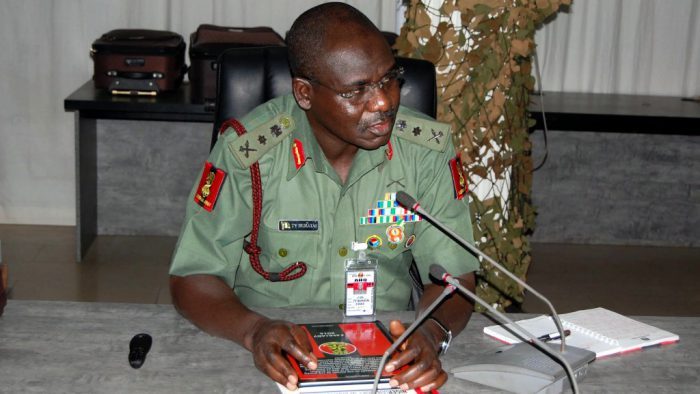 Tukur Buratai, the Chief of Army Staff has disclosed that Boko Haram terrorists have been pushed out of all the north-eastern states except Borno State.

This disclosure was made by the Chief of Army Staff during a meeting with President Muhammadu Buhari and Governors from the North-East states on Monday August 10.

Buratai further disclosed that troops are sharing intelligence to rout the insurgents out of Borno.

According to a statement released by  Garba Shehu, the Presidential spokesperson, Buratai reportedly said;

“There are no Boko Haram terrorists in neighbouring states. They have been pushed out, and now cornered in Borno State.

“We are coordinating with civil and traditional authorities, mobilising and reinforcing and all we need is patience. We will not relent.”

In a related story, WITHIN NIGERIA reported that a viral footage of some members of the Abubakar Shekau-led faction of Boko Haram observing the Eid Al-Adha prayer in an undisclosed bushy area in Niger state has surfaced online.

Recall that the Eid Al-Adha was celebrated by Muslim faithfuls across the globe on July 31.

Eventhough the date of the video is unknown but the footage shows about 100 people observing the Eid Al-Adha prayer in an undisclosed bushy area.