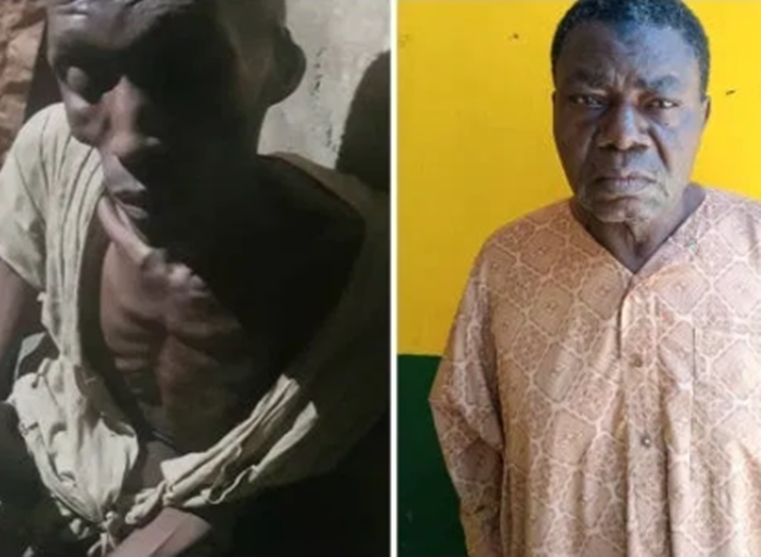 The police command in Kano state have released the photo of the man who locked up and starved his biological son, Ahmed Aminu, 30, for seven years in Kano State.

The spokesperson of the state police command, DSP Abdullahi Haruna, in a statement said Aminu who is a resident of Farawa Quarters, Kumbotso Local Government area of Kano State, locked up his son inside his car garage (solitary confinement) within his house for about seven (7) years without proper feeding and health care.

Haruna in the statement said good samaritans reported the incidence leading to the rescue of the victim at about 11:15 pm on Thursday night August 13. DSP Haruna said upon investigation, the father confessed to having locked up Ahmed who is looking emaciated and dehydrated for three years and on allegation of indulgence in suspected Drug-Abuse.

“The Kano State Police Command wishes to inform members of the general public that on the 13/08/2020 at about 2315hrs, information received revealed that one *Aminu Farawa* ‘m’ of Farawa Quarters, Kumbotso LGA Kano State locked up his biological son, one *Ahmed Aminu* ‘m’ 30 years old of the same address inside his car garage within his house for about seven (7) years without proper feeding and health care.

Team of Operation Puff-Adder was raised and immediately swung into action. The victim was rescued and rushed to Murtala Muhammed Specialist Hospital Kano and admitted.

The father was arrested. Preliminary investigations revealed that the father confessed to having locked-up the victim for three (3) years on allegation of suspected Drug-Abuse. Those that reported the incident said he (the father) locked him up for 7yrs, however, the father confessed 3yrs.”