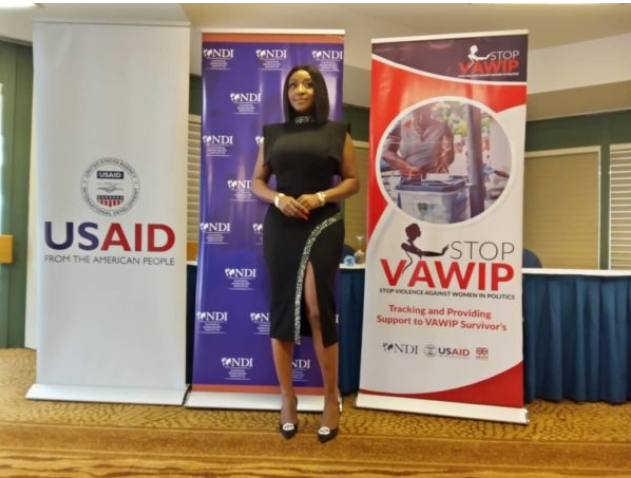 Coming after her re-appointment at the Akwa Ibom tourism, Popular Nigerian actress Ini Edo, has been named the ambassador for women’s empowerment of the National Democratic Institute (NDI)

The NDI or National Democratic Institute for International Affairs is a non-profit organisation that works with partners in developing countries to increase the effectiveness of democratic institutions.

Ini Edo was unveiled by NDI during a press conference at the Transcorp Hilton, Abuja on Thursday.

Speaking at the event, the 38-year-old movie star said she would elicit the support of citizens of the country to join the cause for increased women participation in electoral and democratic processes.

“It is a critical time for women in our country, and I am very excited to be here and to formally take on the role of the NDI Ambassador for Women’s Empowerment in Nigeria,” Edo said.

“When I first learned from Stephen Snook of NDI’s work in Nigeria, I wanted to help. I believe women should dare to do great things. NDI is addressing two issues that are very important to me.

“The first of these is the low percentage of women who serve in public office. On average, in all the parliaments of the world, only one seat out of four is held by a woman. This isn’t enough.

“Further, only 16 percent of parliamentarians are under the age of 40 — and the larger percentage of these are also men. Women make up fifty percent of the population in every country.

“We’re underrepresented in eligible age groups. In Nigeria, I’m sorry to say the number of women in elected offices is worse than the world average, even worse than some of our neighbours.

“And so l am joining the cause of improving women’s chances of running successfully for elected office. I won’t be alone. There are many who will be helping prominent Nigerians…

“We will be united in the cause of amending laws and addressing other barriers, to level the playing field so women can compete successfully for elected office in our country.”

For this cause, NDI, with support from the United States Agency for International Development (USAID), backed two initiatives aimed at increasing women’s representation in public offices.

Under the Supporting Advancement of Gender Equality (SAGE) initiative, NDI sought to remove barriers by advocating for reforms of the country’s laws and political party policies and procedures.

The second initiative seeks to address and mitigate gender-based violence, particularly around elections, to reduce the barriers women face to their participation in politics and elections.

“To comprehensively address the barriers to women’s qua participation, we need strong advocates who will not back down from the challenge,” Stephen Snook, the country director of NDI, said.

“We are proud to welcome Ini Edo as an Ambassador to our program, we will raise awareness and support women’s political participation all across Nigeria.”