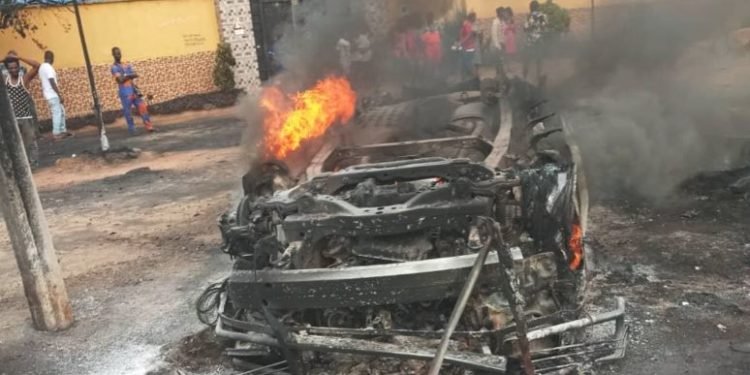 The passengers in a commercial bus were burnt beyond recognition on Sunday when the vehicle went up in flames in Anambra State.

The incident, which happened along Ihiala-Onitsha road was reportedly caused by overspeeding.

It was gathered that one of the tyres of the vehicle burst causing the bus to summersault before the resultant fire burnt the passengers to death.

The spokesman of the Federal Road Safety Corps in the state, Kamal Musa, confirmed the incident.

He said all the passengers on board were burnt beyond recognition along with the bus.

Mr Musa said the number of casualties was yet to be determined due to the intensity of the crash.

“A lone fatal road traffic crash allegedly caused by tyre burst as a result of excessive speeding leading summersault and the vehicle burst into flames this evening 6th September, 2020 at opposite Omorka in Ihiala along Ihiala- Onitsha road.

“Information reaching the Command states that all passengers on board were burnt beyond recognition along with the bus.

“The corpse of the only male adult who jumped out of the vehicle in the process has been deposited at Mogue in our lady of Lourdes Ihiala.

“Meanwhile, Anambra State fire service has been contacted and FRSC rescue team from Ihiala Unit Command are on ground to ensure free flow of traffic while obstruction is being cleared,” the official said.