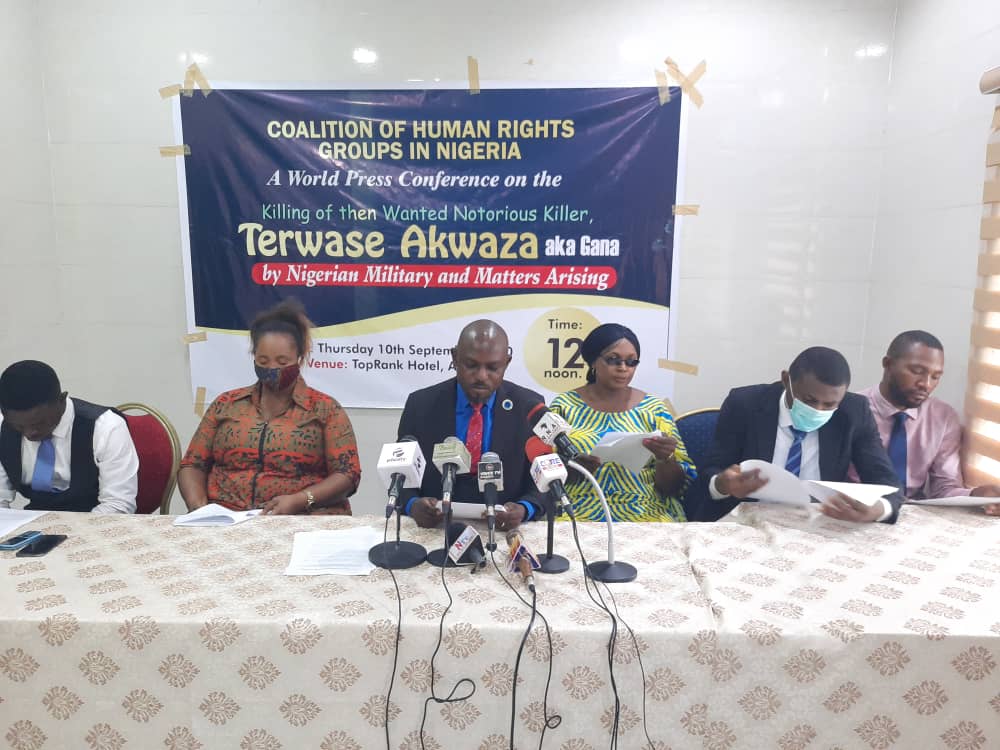 A preliminary report by the Coalition of Human Rights Groups in Nigeria has revealed that Terwase Akwaza (Gana) was killed during a shoot-out with security operatives on Tuesday, 8th September 2020, along Makurdi-Gboko Road in Benue State.

Recall that the deceased terrorist has been declared wanted by security operatives for his atrocities in the state..

He turned in himself to embrace the amnesty by the Benue State but was killed on his way to Makurdi to meet with Governor Samuel Ortom.

The governor had claimed that Gana was seized and gunned down by men of the operation Ayem Akpatuma III.

However, contrary to Ortom’s claim of extra judicial, latest report by the coalition have shown that Gana met his waterloo during a gun duel with military personnel.

Edward Omaga Esq, the Special Rapporteur in a statement said after a rigorous investigation, it was established that there was a gun battle between some loyalists to Gana and military personnel, which led to his death.
The report therefore, rubbished the claim by Ortom that Gana was killed extra judiciously. 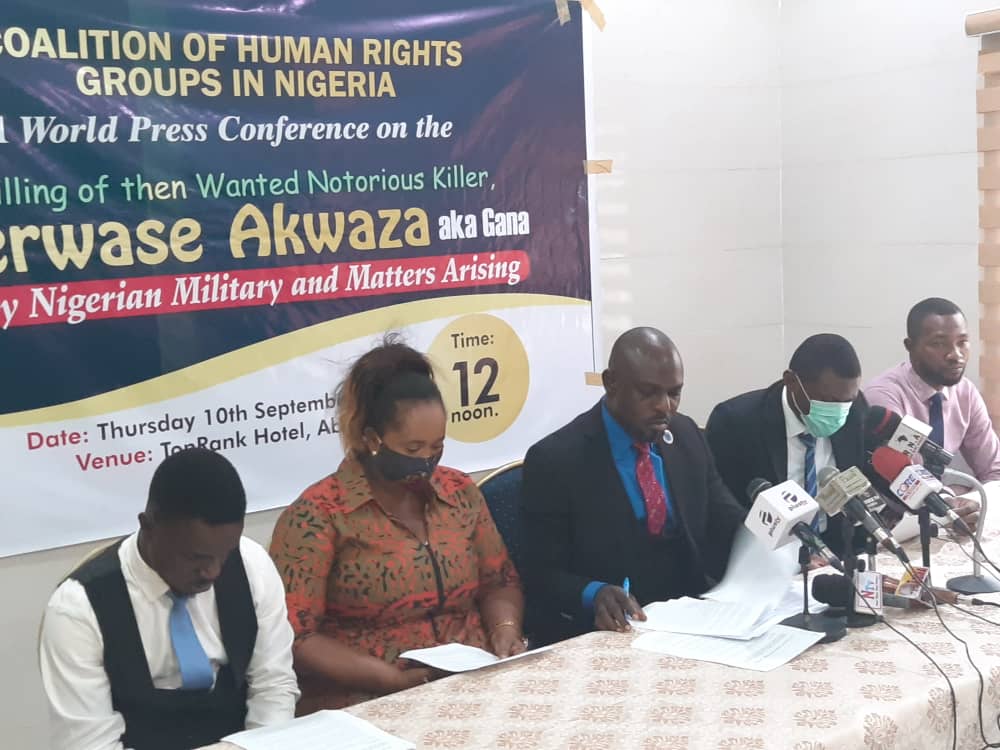 His statement read below.

The recent killing of Terwase Akwaza (Gana), a notorious militia leader in Benue-Taraba axis by troops of the Nigerian Army has elicited widespread concern from the relevant stakeholders in Benue State, as well as across the country. There were allegations of human rights violations by the Nigerian Army in the sense that it was speculated that (Gana) was on his way to Makurdi, the Benue state capital to surrender arms and embrace the Amnesty Programme initiated by the Governor of Benue State.

The Governor of Benue State has alleged that Gana was killed extra judiciously while he and 42 other repentant criminals were being conveyed to Makurdi, the state capital after they embraced the government’s amnesty programme.

The Nigerian Army has come out to state that Gana was killed during an exchange of gunfire at a roadblock mounted by the Army along Gbese-Gboko-Makurdi road with other members of his gang arrested and a large cache of arms recovered in the process.

This stance by the Nigerian Army has been questioned in several quarters as not reflecting the reality on the ground and indeed a case of extrajudicial killing, which is a gross violation of human rights.

The Coalition of Human Rights Groups in Nigeria consequently launched an investigative probe of the incident to unravel the circumstances that led to the death of Terwase Akwaza (Gana). We relied on information provided by eyewitnesses and other locals in the area of the incident. We also aggregated the views of local vigilante groups operating within that area in the attempt to have an objective and balanced judgment. The opinions of some political actors were aggregated to form a background to the Amnesty programme initiated by the state government.

We were able to gather from credible sources that indeed there was a shoot-out between Gana and his boys in an entourage of about 20 vehicles driving dangerously along the Makurdi-Gboko road when they were accosted by troops from the 4 Special Forces Command in Nasarawa State who had mounted an spontaneous roadblock acting on Intel on the movement of a large convoy with sporadic shootings.

From the information gathered, it was indeed revealed that the late Gana who was seating on top of one of the vehicles opened fire at the military checkpoint and at that point there was pandemonium and sounds of gunshots rented the air. The convoy of Gana rammed into the military checkpoint after the soldiers took cover and returned gun exchanges with the group.

It was also gathered that the identity of Gana was not initially ascertained, not until he was neutralized that his identity was confirmed. By then, he had sustained gunshot wounds that ultimately led to his death.

It was also discovered that it was when news reached the governor that he made frantic efforts to reach the military commanders in the state, informing them that Gana was his guest and that he was on his way to Makurdi to surrender for the Amnesty Programme of the State government.

It was at this point the governor was informed that there had been a shoot-out with Gana and his team members and he sustained gunshot injuries. We gathered that the governor was furious and consequently called for a press conference alleging that the Nigerian Army killed Gana despite having knowledge of his movement from his base to Makurdi the state capital.

After an extensive probe of the incident that led to the death of Terwase Akwaza (Gana), we indeed state that there was a communication gap between the State Government and the Nigerian Army in operation in Benue-Taraba Axis. This could be a function of two things; one possibility is that the state government deliberately left the Nigerian Army out of the Amnesty process or it was an oversight.

Consequently, it is our position that a case of extrajudicial killing cannot be established when all available facts point to the fact that the late Terwase Akwaza (Gana) at the time of his death was in possession of firearms on measurable proportion.

It is also our considered view that the movement of such a large cache of firearms should ordinarily attract the attention of the security operatives. If indeed the said Gana was on his way to embrace the Amnesty Programme of the State Government, it is curious that there was no security escort in his convoy and with such weapons at his disposal.

The fact that was established that the convoy of Gana moved at neck-breaking speed occasioned by sporadic gunshots in an area that is experiencing pockets of insecurity is most despicable and should give the relevant security agencies a cause to act and promptly.

It, therefore, does not hold water to state that he was killed extra-judiciously as there was an established case of threat to life from the Gana group and the response from the Nigerian Army eventually led to his death.

The Coalition of Human Rights Groups in Nigeria as a result of the forgoing herby makes the following recommendations: