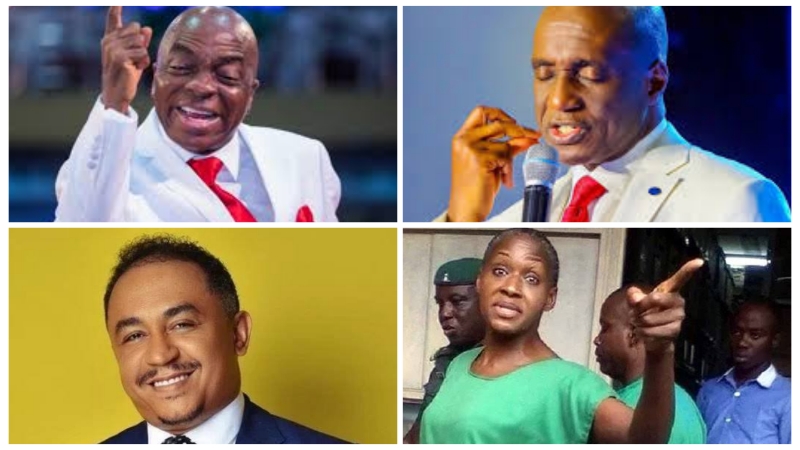 Dear Pastor Ibiyeomie, you can not kill Daddy Freeze

“I will never be alive to see somebody insult my father, you are not born, you are not born. I will kill you, I will tear you to pieces. Me I will arrest him”, Pastor Ibiyeomie to Daddy Freeze.

When you advise people not to wear power like burglary, sometimes they take it as insult, shifting their minds away from possible interpretations that power is transient. You do not have to be an elected or appointed official before you wear power like burglary. As far as you are rich, connected and have influence to make or mar an individual, you need to be careful with power because it has expiry date. Even if you have a permanent authority, your life is not.

Late Evangelist Roland Olubukola Olomola was a great gospel singer with melodious voice. I was browsing through my music library when I came across one of his many songs titled ‘OJA LAYE’ (life is a market) where he lyrically admonished all to see this life as a market and as joyous, easy and accommodating a market is, either you stay long or not, you will surely leave one day. The late ‘BABA ARA’ described humans and possessions as sand (erupe) who eat, drink, marry and work to gather sand, sleep on sand, use sand as covers and later become sand. Late Evangelist Roland also advised that humans should always run away from pride and unbridled tongue.

Nigeria is a nation where people have no regard for lives and can issue threat at will. In any society where there’s no regard for life, growth is always in reverse. I thought only politicians issue threat to their opponents or influentials who know people in power use their privileges to molest and intimidate but it still remains a shock to me that intimidation has now found its way into the house of God. Supposed men of God believed to be filled with holyspirit whose sole responsibility is to guide and save have become intimidators and oppressors of the same men they seek freedom for.

Although religious leaders are also humans and have tendencies to create ‘new lows’ sometimes but I believe that they should be better men of second thought who easily retract words when they goof. I held unto this belief that Pastor Ibiyeomie would retract his words and apologise for tearing apart the garment of salvation but he did not because he is a citizen of a country where you are always right if you are rich and connected especially those who hide under the banner of religions to act like demi-gods.

Daddy Freeze is equally a lousy fellow who truly murdered Bishop Oyedepo with words. The ‘half-caste’ abandoned his garment of respect and described one of the richest pastors in Nigeria with abusive words. Daddy Freeze was wrong, just like his media wife, Kemi Olunloyo who once raised and promoted unproven allegations against the person of Pastor Ibiyeomie. The popular blogger was prosecuted and jailed for months before she was released. How God does his work is truly divine because Kemi Olunloyo later worshipped in the church of the same man who allegedly ruined her media empire as stated by Kemi. We are not barbarians and laws make us better humans. Even if we don’t respect it, we must follow it strictly as stipulated. When men of God speak with anger, their words come with thunder and brimestones and whatever they say come with fulfilment but how Nigeria men of God lack this divine touch and power still amazes me.

Daddy Freeze, a proponent of new gospel who presents himself as the 13th disciple of Jesus Christ through new teachings also messed up. He only has the willingness of salvation but lacks the character. Pastor Ibiyeomie being a senior pastor in the church business should know better that God is always at war with the proud ones and does not appreciate humans who claim to be what they are not. Like I told the vice-chancellor of University of Ibadan, Prof. Idowu Olayinka in a piece I wrote titled ‘The pharaohs we see today, we shall see them no more’ that nobody has ever defeated power, you either leave it or power consumes you. He ignored the warnings of the qspirit and now he will leave it and becomes a visitor in the house of power.

If Pastor Ibiyeomie did not read the book of Romans chapter 11 verse 18 which says ‘Do not be arrogant toward the branches. If you are, remember it is not you who support the root, but the root that supports you, I believe he must have surely come across the book of Luke 18: 14 which says “I tell you, this man went down to his house justified, rather than the other. For everyone who exalts himself will be humbled, but the one who humbles himself will be exalted.”.

Pastors and Imams should be indicators and symbols of humility. They should be social actors of change and agents of liberty and freedom. When frustrated or angered, they should not tow the path of their frustrators nor oppressors. We all know that the character Pastor Ibiyeomie exhibited in the viral video is a very low one but how many people will advise the senior pastor to read up Proverbs chapter 29 verse 28 “One’s pride will bring him low, but he who is lowly in spirit will obtain honor”.

We all know that pastors can not kill because they are not gods but can only use goevrment officials loyal to them to arrest, intimidate, detain and imprison. Pastor Ibiyeomie should spare us his unnecessary show of lousy power without class and devote more of his time in reading the bible.

Life is a market. Humans are sands. Vanity upon vanity. Daddy Freeze and many others will continue to keep Bishop Oyedepo in checks and they will not die because you can not kill them.

Apagunpote Olayimika Chocomilo can be contacted via 08164411922 or [email protected]