Controversial Nollywood actress, Tonto Dikeh took to her InstaStory on Instagram to talk about something a man should never do to his woman. In was can be described as an indirect hint on some of the things she went through while she was married to her ex husband, Olakunle Churchill, the mother of one clearly stated what a man should do and not do to his woman.

According to the 35 year old, a man should learn to defend his woman in public and correct her in private. The 35 year old added that no man should ever give anyone a reason to disrespect his woman.

Form someone who has experienced a failed marriage, there are speculations that Tonto is indirectly passing a message across to her ex husband just like she always does. 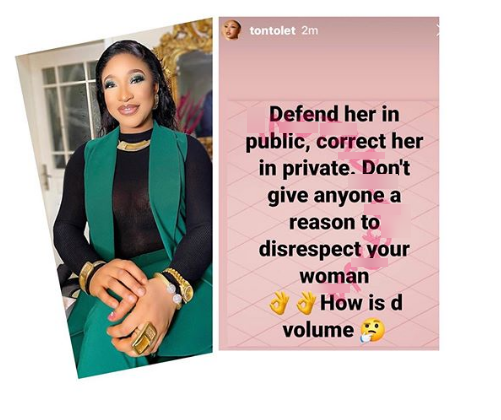 If I'm president, Jigawa will be one of Nigeria's food baskets - Amosun