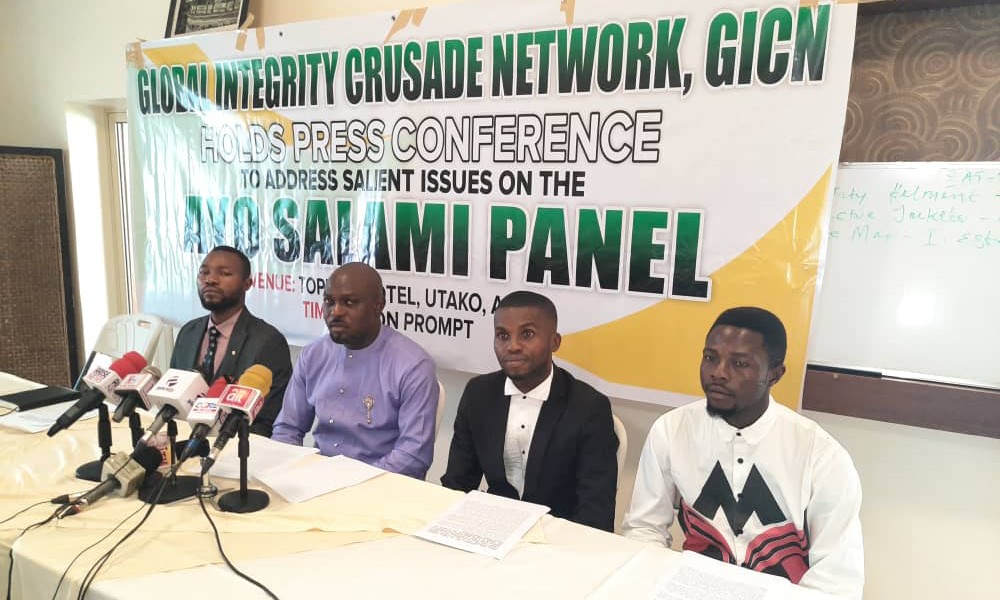 The Global Integrity Crusade Network(GICN), has called for caution in plans to extend invitation to the Attorney-General and Minister of Justice, Mr. Abubakar Malami, SAN, to appear as witness before the Justice Isa Ago Salami Panel.

The Justice Salami Panel is currently probing allegation of corruption against the suspended Acting Chairman of the Economic and Financial Crimes Commission, EFCC, Mr. Ibrahim Magu.

GICN at a press conference in Abuja, explained why the AGF should not appear before the panel.

Executive Director of GICN, Barrister Edward Omaga, said it is needless for the AGF to appear before the panel because the panel has gathered evidence which are enough to do justice in its report

He said since the proceedings at the panel began, the group decided not to dabble into the affairs of the panel, to enable the panel come up with a report that cannot be faulted by Nigerians because ”we trust the integrity of the former president of the Court of Appeal”.

Omaga said, ”There were reports that the Attorney General of the federation and minister of justice(AGF), Mr Abubakar Malami (SAN) is to appear as witness before the panel and like we rightly stated earlier, we at GICN want the members of panel to be allowed to use their own wisdom in discharging their mandate without being teleguided by people who are supposed to be busy defending themselves by responding to allegations made against them.

”Already, the panel has gathered evidence which are enough to do substantial justice. In case those calling on the AGF to appear the before the panel do not know, the AGF has been playing a supervisory role on the EFCC and we make bold to say that the number one chief law officer of the Country has played this role creditably well, so there is no need to have him as witness before the panel.

”We at GICN also need to remind them that after the completion of the sitting of the panel, the report of the panel would be sent to President Muhammadu Buhari, who will in turn seek the legal view of the AGF, so, if he is invited to be a witness before the panel, he would be deprived from offering his constitutionally recognized legal view when sort, having appeared as a witness at the panel.

”The handwriting of some mischievous elements is very clear. There may appear conflicting roles as AGF may be regarded as a witnessing party and someone offering legal advice on the matter to Mr. President. We envisage a situation where some individuals want use this as a bait to deprive the AGF of rendering his Constitutional responsibilities of offering legal advice on the matter as well as deprived Nigerians from benefiting from the AGF’s legal acumen.

”Therefore, we are calling on the Justice Isa Ayo Salami panel to ignore the call for Mr Malami to appear as a witness before it”.

He said if the minister is allowed to appear as a witness before the panel, it will compromise his constitutional duty adding that as AGF, inviting him is tantamount to compromising his legal duties.

He also said in framing a charge, as is the case with all other proceedings, the office of the Attorney General is exercising a constitutional role of prosecution and not a role of testimony.

”The constitution does not envisage the role of a witness in the office of the Attorney General of the Federation over a matter in which it stand in a prosecutorial and supervisory role.

”It can not therefore be placed in a compromise position making it impossible for the office to exercise its constitutional role of proffering a legal opinion or prosecuting the allegations when the report establishes a prima facile case justifying prosecution”.