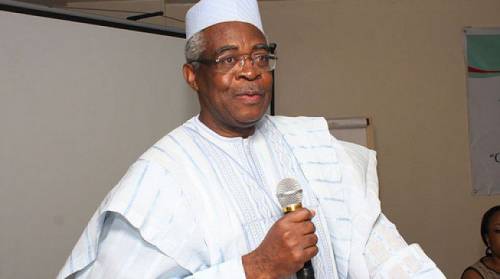 TY Danjuma and his ancient habits

Nigeria is indeed a dynamic country. This is a country where some of its citizens have not been fair to it despite what they have benefitted over the years. That Nigeria remains, a country is indeed by the mercies of God because when one is availed some of the things happening in high places, you would indeed weep for Nigeria.

I am worried because of the insensitivity of some supposed elderstatstmen in the county who instead of devoting their time and resources towards making Nigeria better are instead busy fueling ethnic and religious division across the country. One of such individuals is General T.Y. Danjuma.

General T.Y Danjuma remains one of the few Nigerians that benefitted immensely from Nigeria. Till date, his source of wealth aside questionable is worth a whopping $1.2 billion according to a report published by The Commonwealth Activists, United Kingdom.

The report described T.Y. Danjuma as one of the purveyors of disunity in Nigeria who has used his position and influence as a former Chief of Army Staff, former defence minister as well as his fortune to fester ethnic conflict in the North Central region of Nigeria.

“In Nigeria, there have been various agitations along ethnic and religious lines that has somewhat resulted in conflict in most states in North Central Nigeria. States such as Taraba, though in North East has experienced an ethnic conflict that most stakeholders have attributed to political interference and the quest for ethnic domination.”

“It was also identified that some political leaders and highly exposed people from these states have contributed to the festering of the conflict in the region. One of the identified is a former defence minister and businessman Theophilus Danjuma of the Jukun ethnicity in Taraba state. T.Y Danjuma as he is fondly called has been fingered to be using his influence and resources to be fuelling conflict between the Jukuns of his home state of Taraba and the Tivs of Benue state.”

I indeed agreed with this position because over the years there have been instances where T.Y Danjuma was alleged to have been arming militia groups in his home state of Taraba to wreak havoc in neighbouring states all for ethnic domination and thereby heating the polity and compounding an already fragile atmosphere.

This insatiable quest has also led to some form of religious tension in the country where wild allegations of acts of genocide against Christians was pushed into the public space through proxy groups and associations, which in recent times have been coming from outside the shores of Nigeria. The recent report by the All-Party Parliamentary Group, U.K. was also identified as one of those ways T.Y Danjuma and his cohorts have been using to cause disaffection in the country. This much was highlighted in the report by the Commonwealth Activists.

“It has been widely speculated that since the coming of Muhammadu Buhari as president, some far-reaching measures were taken to make some extraordinary wealthy Nigerians account for the sources of their wealth. One of such individuals is T. Y Danjuma, who is believed to have been uncomfortable with the stance of the Muhammadu Buhari administration.”

“It was also stated that government probe of the frequent clashes between the Jukuns and the Tivs revealed that T.Y Danjuma has on numerous occasions used his resources to arm Jukun militia groups to wreak havoc in communities in Benue state. This much it was revealed was responsible for the frequent clashes between militia groups in Taraba and Benue state. This is against the position canvassed by the APPG that the government of Nigeria is subtly encouraging genocidal actions against Christians in Nigeria.”

This is the phenomenal T.Y Danjuma and why I indeed stated in the opening paragraphs that some Nigerians have not been fair to the country despite what they have benefited from the country over the years. This is also of the heels that the Zaki Biam and Odi massacres were carried out during the period T.Y. Danjuma was the Defence minister and must have given the all-clear for the operations in his capacity as the Minister of Defence.

This is indeed despicable and an indication that the likes of T.Y Danjuma are out against the interest of Nigeria. The fortune he made from Nigeria is indeed phenomenal. The Commonwealth Activists report did reveal some of the shoddy deals he perpetuated while in was in office in various capacities.

“Danjuma was awarded the oil block in 1998 by the regime of a former dictator and fellow army officer, Sani Abacha, making him one of a handful of Nigerians that made wealth from the country’s energy reserves. Danjuma paid $25 million in 1998 for the oil field exploration license that made him a billionaire. A year later, he became Nigeria’s defence minister as the country returned to democracy.”

“In some quarters it has been stated that the source of the $28 million was gotten from illicit deals he perpetuated while he was in government. However, this claim has not been verified since there has been no document that has indicted him for fraudulent practices.”

T.Y Danjuma remains a soldier of fortune who milked Nigeria through his involvement in shady deals that was aptly captured by the Commonwealth Activists report wherein it was stated

“An analysis by Private Eye magazine revealed Danjuma as one of several “politically exposed persons” using mysterious U.K. shell companies for money laundering. Danjuma was among 40 of the “world’s better connected wealthy elite” who “conceal assets” with the help of shell companies.”

With all of these revelations about T.Y Danjuma, I am not sure Nigerians should be deceived by his public posturing pretending to be carrying out acts in the interest of the country. And to think that such an individual that ought to serve as a uniting factor in the affairs of Nigeria is ironically the one festering ethnic and religious conflict in the country.

I dare to say that if T.Y Danjuma has his way, he would have sold Nigeria even in his old age. This is how despicable his actions have been and a reason why the relevant authorities in Nigeria must see to the fact that the likes of T.Y Danjuma should be brought to book to account for his atrocities against Nigeria.

The amount of resources he has expended in causing ethnic and religious tension in Nigeria would have been used to improve the lot of the people because after all his wealth his ill-gotten because there is indeed no justification with his career and income to equate with his current net worth that runs into billions of dollars.

If not for anything, I am glad that the Commonwealth Activists indeed did justice in revealing T. Y. Danjuma as a purveyor of disunity in Nigeria despite the grandstanding depicting himself as a man dedicated to the socio-economic wellbeing of Nigeria. The reverse is the case because here is a man who is ethnically parochial and religiously intolerant, and who for him the only thing that matters is for the domination of his Jukun ethnicity above all other ethnicities amongst its neighbours.

I think at this point we must learn to call a spade a spade to realize that T.Y Danjuma remains with his ancient habits that thrive in exploitation and divisive tendencies in furtherance of an intrinsic and insatiable penchant to continue to feed fat from Nigeria.

It is thus a blessing in disguise that indeed the coming of President Muhammadu Buhari has been able to address the T. Y Danjuma obsession with Nigeria, which he sees as his birthright and would go any length further to protect his interest at the detriment of national development.

I commend President Muhammadu Buhari for standing on the side of the people and no matter the resources channelled towards casting aspersion on the credibility of the efforts of the present administration, the truth shall always prevail. While it is not in my position to render advise to T.Y Danjuma to change his ways and make firm commitments towards peace and stability of Nigeria, I would however still say that this is the time for T.Y Danjuma to repay Nigeria with good deeds. The choice is his as posterity would not be kind to him if Nigeria goes up in flames.