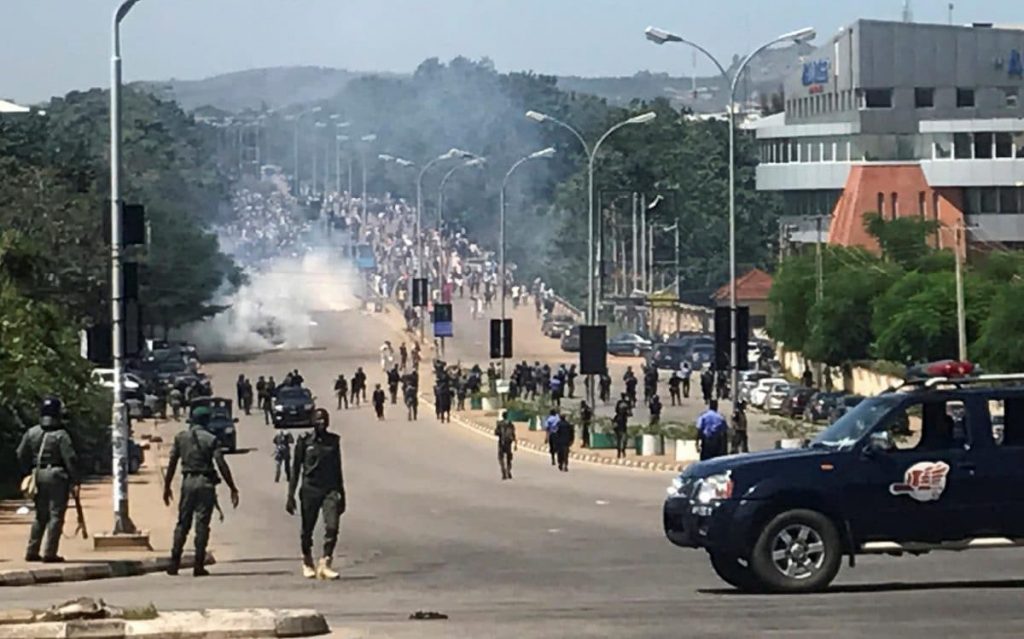 The Coalition Save Nigeria (CSN) has urged youths not to allow themselves to be used by disgruntled politicians to destroy the country through the #EndSARS protests.

While admitting that it is in place for every Nigerian to seek better governance, the CSN said the current exercise may have been hijacked by those against the interest of the nation.

Protest across the country demanding an end to Police brutality has intensified despite disbandment of the Special Anti-Robbery Squad (SARS) and subsequent formation of the Special Weapons and Tactics Team (SWAT).

In the last couple of days, the protest has taken a violent twist, raising questions about the original intents.

In a statement signed by President, Dr Raymond Ikoh, on Friday, the CSN said by hoodlums and political thugs have been mobilised to ensure that the country witnesses a crisis of phenomenal dimension.

According to Ikoh, these persons and groups are “willing to carry out their nefarious activities not minding whose ox is gored so long they fulfil their overarching aim of setting the country on fire”.

The group, however, urged teeming youths in the country not to allow themselves to be used by some vested interest to destroy their country.

It added that young people must wake up to this stark reality and turn down the overtures of these disgruntled interest aiming to grind the country to a halt.

The Coalition Save Nigeria is issuing this press statement in light of the negative trend the EndSARS protest has assumed in recent times. While we know that every citizen of Nigeria has a fundamental right as enshrined in the constitution to freedom of speech and association, however, it must be understood that there is every tendency for this protest to be hijacked by those that are against the interest of Nigeria.

The Coalition Save Nigeria is indeed concerned that a lot seems to have gone wrong with the protest, with the bulk of victims’ innocent persons going about their normal businesses. This is indeed worrisome and a reason why there should be caution by the protesters in driving home their demands from the federal government.

We are also aware of scores of instances where innocent Nigerians on emergencies were trapped as a result of the protest, thereby resulting in deaths and near-death experiences. The case of a pregnant woman who died alongside her unborn child in Abuja calls for great concern from well-meaning Nigeria.

We reliably gathered that both mother and child could not make it to the hospital because of the blockage of the Abuja airport road, and she died after suffering untold hardship.

The Coalition Save Nigeria condemns this action in the strongest possible terms. It wishes to state that Nigeria is not a banana republic where indiscriminate actions have led to avoidable deaths of innocent Nigerians.

We are also convinced that the EndSARS protests have been taken over by hoodlums and political thugs who have significantly been mobilized to ensure that the country witnesses a crisis of phenomenal dimension.

The death of the pregnant woman and her unborn child is just one out of the numerous casualties that probably have gone unnoticed as a result of the activities of hoodlums that have hijacked the EndSARS protests.

This indeed calls for concern from all well-meaning Nigerians because the implication of allowing some disgruntled politicians to continue to infiltrate the ranks of the peaceful protesters might have phenomenal consequences since they do not have the interest of the country at heart. Their ultimate goal has remained the disintegration of the country.

It is also instructive to state that these hoodlums are willing to carry out their nefarious activities not minding whose ox is gored so long they fulfil their overarching aim of setting the country on fire.

The Coalition Save Nigeria is sending a very strong message to the teeming youths in the country not to allow themselves to be used by some vested interest to destroy their country. These politicians and their associates have amassed ill-gotten wealth and secured the future of their children who at the slightest would jump into private jets and leave the country while the teeming youths who struggle for their daily survival bear the brunt of untold hardship.

The youths of Nigeria must wake up to this stark reality and turn down the overtures of these disgruntled interest that have been mobilizing resources for the protest to grind the country to a halt.

The Coalition Save Nigeria is alarmed at the dangerous dimension the EndSARS protest has assumed and is therefore calling on our teeming youths to rise to the occasion and protect the country instead of destroying it. The implication of this is that at the end of the day, we would all be victims, and Nigeria would be worse off.

The death of the pregnant woman and her unborn child who could not find her way to the hospital to access medical care is disheartening and must be condemned by all and sundry for we know that scores of others have also suffered physical, emotional and psychological damages as a result of the blockade.

This must indeed stop as we urge the government to begin the process of carrying out the necessary reforms in the operations of the Nigerian Police Force and other arms of government towards addressing the myriads of challenges in the country.

The Coalition Save Nigeria is aware that the government has responded positively to the demands raised and it consequently behoves on us to give peace a chance.  We must also be reminded that indeed Nigeria belongs to all of us and whatever affects Nigeria affects all of us from Lagos to Bauchi, Enugu to Portharcourt and Ibadan to Cross River.