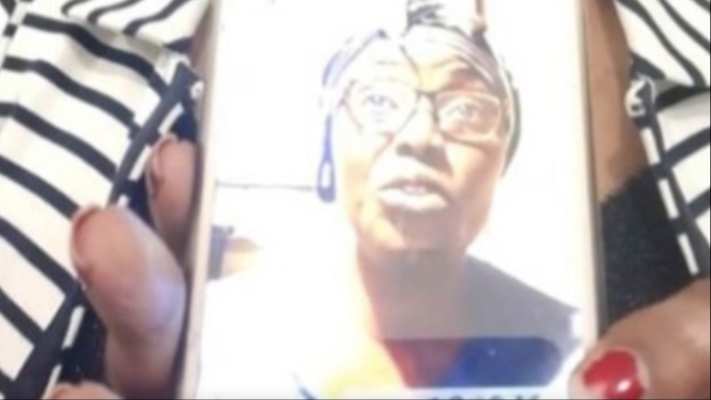 A Nigerian woman identified as Victoria Nicholas has maintained that her adopted son died of gunshots at Lekki toll gate and that the dead body is in Aba, Abia state.

Recall that men in army uniform invaded Lekki toll gate around 7pm on October 20 where protesters had been demonstrating peacefully against police brutality under the #EndSARS campaign.

Following the alleged Lekki shooting, there has been controversy over the casualties recorded.

The governor of Lagos state, Babajide Sanwo-Olu had earlier stated that nobody died but later admitted the death of one person from trauma at a private hospital.

Reports also revealed that most of the people named as dead vict of the shooting have come out to deny the reports.

The woman identified as Nicholas on Sunday while speaking in a live Facebook session said Anthony Okechukwu, whom she called her adopted son, was killed during the Lekki shooting.

Nicholas said she had been taking care of the 23-year-old since the death of his father while he was three.

“I adopted Anthony at the age of three when his dad passed away. I have been the one seeing to all his needs, his schooling and everything. His mum is my elder sister. So Anthony is my son, there is no day we don’t communicate,” she said.

“I was so heartbroken when I saw his body on social media. He was shot and he died at the protest. He had videoed himself dancing with his friends at the Lekki toll gate during the protest. Since then I have not been myself. Losing a young man like that is not easy.”

The presenter for Every Day Event, the platform which hosted the live session, called in an elderly woman who is said to be the deceased’s mother.

The woman, who reportedly slumped during the video conversation, said the aunt was responsible for his welfare before his alleged death.

“It was my sister that was taking care of Anthony before he died of gunshot at Lekki toll gate,” she said.

Nicholas said Anthony’s corpse has been transported to Aba where his biological mother resides.

She condemned the shooting on peaceful protesters by men in military inform, adding that justice must be served.

“I am so confused. I am in pains. I have not told anyone what happened. It is so difficult. The corpse is somewhere in Aba,” she said.

“I want justice. I don’t see any reason why armed men should go after them. It was a peaceful protest until Tuesday. Why would the government do this? You just can’t waste people’s children like this. You put my family in misery and say nobody was killed. This is evil. It must stop.”

During the conversation, there were pictures of what was said to be Anthony’s dead body as well as a video recorded before his death