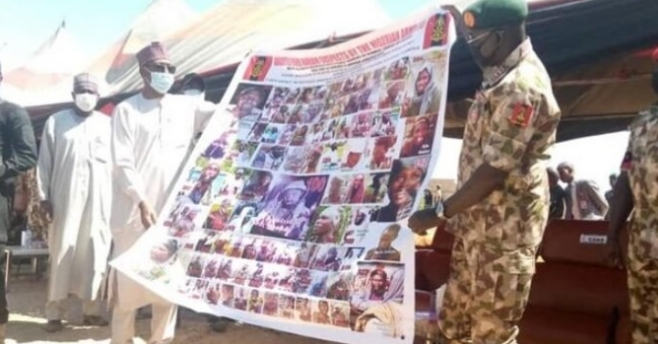 The Coalition Against Terrorism and Extremism (CATE) has pledged to support the Nigerian Army and the Borno State government in accelerating the capture of the 86 terrorists listed on the most wanted list released on Wednesday.

CATE, while briefing select newsmen on the published list, in Maiduguri expressed the desire for the Army to speed the capture or elimination of Boko Haram leader, Abubakar Shekau, Abu Musa Al Barnawi and other terrorists named in the fourth list of Nigeria’s most wanted terrorists so that Nigerians in the northeast can begin the rebuilding of their lives in earnest.

National Coordinator of CATE, Gabriel Onoja said the Coalition akwnowledges the role of the Chief of Army Staff (COAS) Lt Gen TY Buratai and his resolve for the Nigerian Army to bring the last of the terrorists in the country to book.

He enthused that “We are pleased to note that the Nigerian Army is not resting on its oars. Since the first, second and third editions of this most wanted terrorists’ list were published, we have seen the efficiency with which the Army captured or eliminated the criminal terrorists that have made it difficult for people in the north east to lead productive live.

CATE also understands that the terrorists are living amongst us after fleeing from the theatre of operation.

“We are happier that General Buratai promised that the launch is the final push to end Boko Haram’s activities in the north east. We want to implore that the general should lead the army to appropriately treat anyone on that list the way those on the previous lists were treated.

“The signs are already there about how things have changed. The more the terrorists on the most wanted list are taken down the more the number of the towns and villages in the northeast that are able to record improvement in their peace and security index.

“It is our belief at CATE that the 86 terrorists on this latest most wanted list can be captured quickly if the populace cooperate with the authorities by supplying useful information that will assist the Nigerian Army. People should take advantage of the unanimity of technology and telephony to provide useful tips and information to the designated contacts whenever they know something that will help capture any of the wanted terrorists.

“People must however know that they are not to personally approach any terrorist or engage them as only the military and law enforcement agents that are trained for this,” he cautioned.

According to the national coordinator of CATE, the list will put Boko Haram terrorists under pressure, and that they are likely to make a show of still being capable of staging spectacular attacks, which requires that the security apparatus of the country is prepared to deal with this possibility.

He explained that, “You can see that the number of those that made this latest most wanted list has shrunken from the higher number in previous list. It is a testimony to how the General Buratai led Nigerian Army has decimated the ranks of Boko Haram terrorists, irrespective of what faction they belong.

“By publishing another list, the Army has made it apparent that the space is closing in on the terrorists that are left. The efficiency of previous operations to take them down would have set the fear of the troops into them so some panicked behaviour should be expected from the terrorists in coming days, which would include the usual strategy of attempting to carry out spectacular attacks. The security apparatus of Nigeria should be prepared for this.

“Some people may see it as a risk factor, but it is an opportunity. By coming out to attempt attacks, the terrorists would also make themselves available for capture and this is where the timely provision of information about the movement of terrorists and others of their activities will be useful to the Army.

“What we have resolved at CATE is to help mobilize Nigerians to support the Nigerian Army in all ways possible to contribute to the capture of fleeing Boko Haram terrorists. For us it is the one way of assisting to help realize the assertion by General Buratai that capturing those on the latest most wanted list will help bring Boko Haram to an end in the northeast,” Onoja stated.