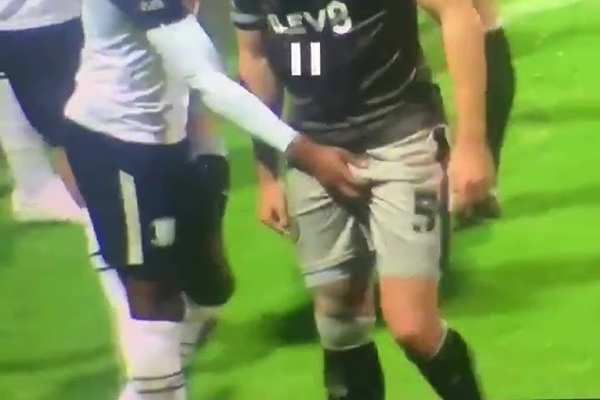 The incident happened during a Championship match played at Preston’s Deepdale Stadium on November 21. It ended 1-0 in favor of Preston.

A video that surfaced on the internet after the match, showed Darnell Fisher reaching out to touch Callum Paterson’s genitals when Preston football club was trying to defend a corner kick in the first half of the match.

Immediately Callum Paterson felt the touch, he tried to look around to see if anyone was paying attention to what was happening. As he was doing that, Darnell Fisher reached out for the second time to grab the genitals more firmly.

Though the Sheffield Wednesday forward tried to call the attention of the center referee David Webb to what was going on around his waist, Darnell Fisher finished the match unpunished and unsubstituted.

However, the English FA would not allow the incident to go without taking a critical look at what transpired between the two English footballers. Hence, the 26-year-old defender will have to face an FA investigation to ascertain whether the visuals shown in the video was anything to go by.

What I saw when I first met Amara Kanu – Osaze Odemwingie

As for Callum Paterson, he has no question to answer as far as the case is concerned except he is called upon to testify before the FA panel if the case gets to that level.

As it stands, the FA’s decision on the incident will majorly depend on the match report referee David Webb will submit to the FA. All things being equal, Preston’s Darnell Fisher might face at least 5 match ban if he is found guilty of the genitals grabbing offense.

Besides Darnell Fisher’s case, a similar incident happened in rugby earlier this year where England rugby union international Joe Marler was banned for 10 weeks for grabbing the genitals of Wales captain Alun Wyn Jones in a Six Nations match.

A check on Darnell Fisher’s records showed that the English defender has committed a similar offense. He was pictured feeling the buttocks of a fellow player during a Championship match but he was not punished for it. Hence, this is the second time he has been caught feeling his colleagues on the pitch. But that might not influence the FA’s decision on the recent incident.