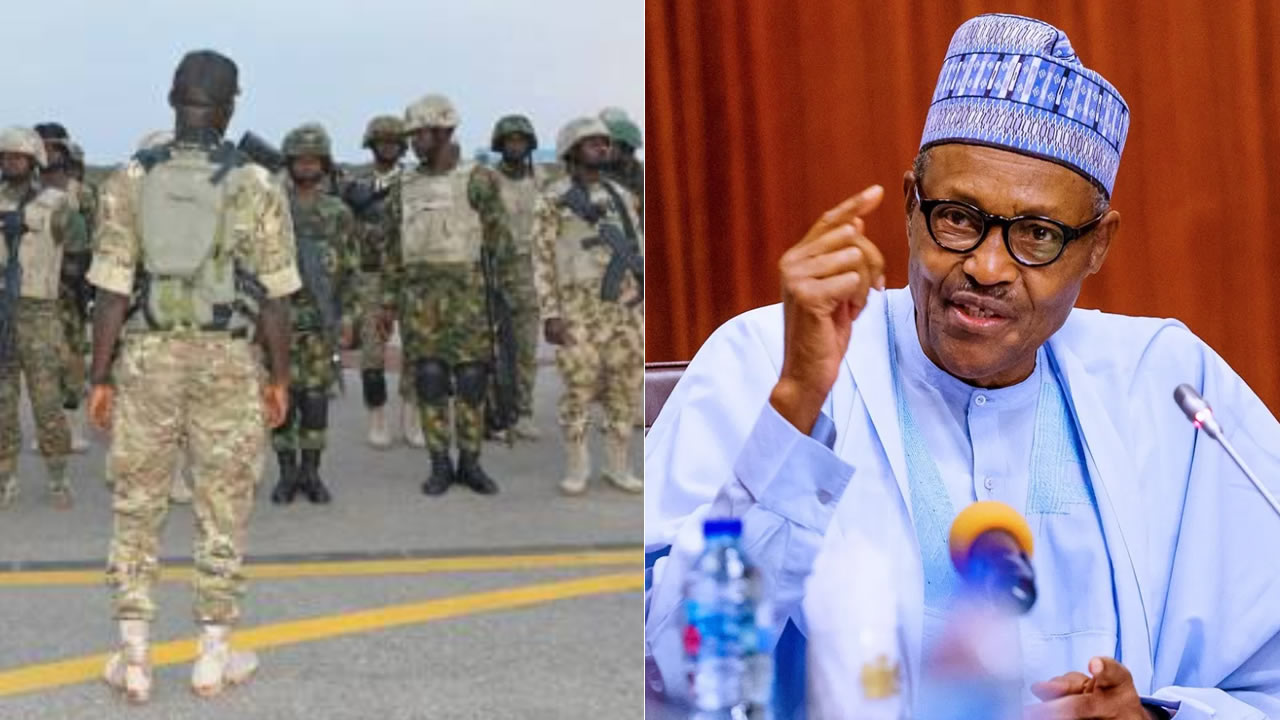 Following the brutal killing of farmers in Borno, President Muhammadu Buhari has ordered the Armed Forces to take the fight to the insurgents on a continuous basis until the terrorists are rooted out.

President Buhari announced the move in a message delivered on his behalf on Monday by a delegation sent to Borno State, following the Boko Haram killing of rice farmers in Zabarmari village.

The delegation sent to Maiduguri to deliver a message of condolence and solidarity with the government and people of Borno State comprised a team of high-level officials representing the executive and legislative arms of government.

The Senate President, Dr Ahmed Lawan spoke for the team and the Chief of Staff, Professor Ibrahim Gambari representing President Muhammadu Buhari presented a joint message, on behalf of the President, the government and people of Nigeria to the Governor, the Shehu of Borno, and the bereaved Zabarmari community.

The President said that he had committed himself to making more resources available to the military to prosecute the war.

He promised to “work closely with neighbouring countries on bilateral and multilateral levels to ensure that there is no hiding place for the terrorists.

“Nothing is more important than ensuring the security of lives and property of the people. Everything is secondary when security is at a stake.

“As we mourn the loss of our sons in Zabarmari, the Armed Forces have been given the marching order to take the fight to the insurgents, not on a one-off, but on a continuous basis until we root out the terrorists,” said the President in a statement issued by his spokesman, Garba Shehu.

The President described the massacre of the farm workers as the worst form of “senseless, barbaric and gruesome murder.”

Buhari, who voiced the condolences of the government and people of Nigeria, gave assurances of his continuous commitment to fighting insurgency and all forms of insecurity in Borno State and all over Nigeria.

He lauded Governor Babagana Zulum for his leadership in running the affairs of the state.

‘Situation better than before’

In his response, Governor Zulum thanked the President for “ensuring relative peace since his assumption of office,” stating clearly that the situation is much better than he met it.

The Governor presented a number of requests on behalf of his people, including that the youths of the state should be enlisted in the military and paramilitary organizations to play their roles in the defence of the nation.

He called on the federal government to assist in the repatriation of Borno indigenes in camps in neighbouring countries and requested the National Assembly to tweak the draft budget to allow better allocation of resources for the Northeast sub-region, which he alleged is being side-lined.

At the palace of the Shehu of Borno, His Eminence Abubakar Umar Ibn Garbai, the traditional ruler described as “madness,” the gruesome killings and urged his subjects to pray and offer useful information to the security agencies.

He thanked President Buhari for his efforts in returning normalcy to the state.

“Before this administration came, all 27 local councils and the Emirs had migrated to Maiduguri. We had no power from the National Grid, Telephone services were discontinued and the airport was closed,” he said, commending the President for changing all that for the better.

The delegation was also in Zabarmari, Jere Local Government where the incident took place.

The local Imam, Alhaji Idris who responded on behalf of the community said they were touched by the President’s gesture, saying, “we are happy that the President is with us in our moment of grief. Tell him that we are very happy with him.”

Others were National Security Adviser, Major General Babagana Monguno (Rtd) and the Senior Special Assistant to the President on Media and Publicity, Garba Shehu.