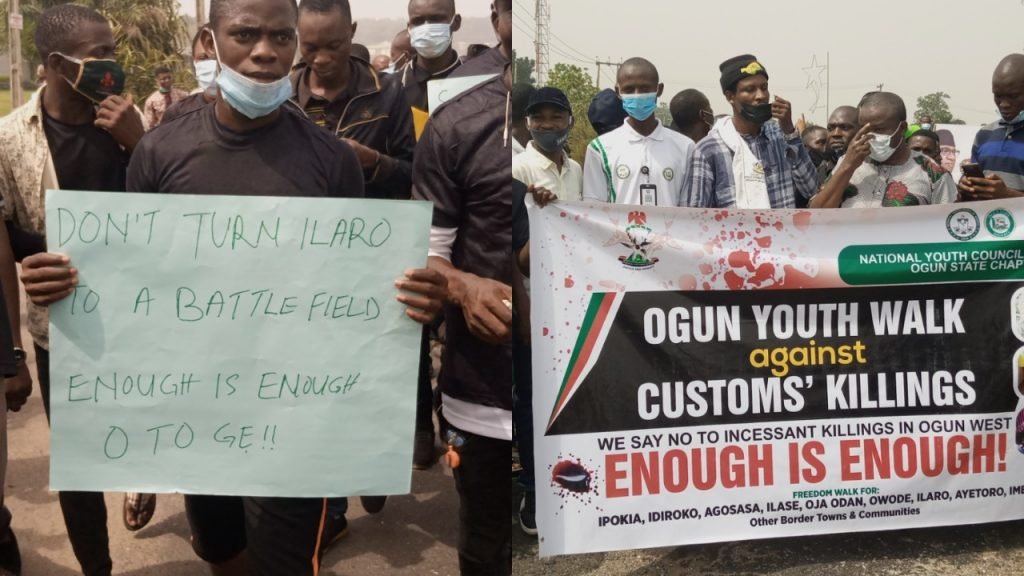 Following the alleged incessant killings by the Nigerian Customs Service, two state lawmakers of Ogun House of Assembly have joined young people protesting against the killing in the state.

WITHIN NIGERIA learnt that at least four persons were killed by stray bullets fired by men of the Nigeria Customs Service, Ogun State Command.

It was also learnt that several people reportedly sustained injuries when the customs officers engaged suspected smugglers in Ayetoro and Ilaro area of Yewa.

Youths under the platform of the National Youth Council of Nigeria engaged in a solidarity walk and headed for the office of the Governor in Okemosan, Abeokuta.

They are protesting in the company of Hon Haruna Egungbohun of Yewa North 2 and Hon Adeyanju Adegoke of Isokan Constituencies respectively.

Speaking at the protest, the chairman of the NYCN, Ogun chapter, Ayelaagbe said the youths of Ogun State would no longer keep quiet “if nothing is done about the killings perpetrated by personnel of the Customs Service in the state, especially in border communities.”

He said the protest was just a peace walk to demonstrate to the government that “the killing of innocent souls by customs officers is no longer accepted by the youths of Ogun State” saying enough is enough.

In their separate remarks, Egungbohun and Adeyanju called for an end to killings by officers of the NCS.

They asked the authorities concerned to wade into the matter before it is too late.