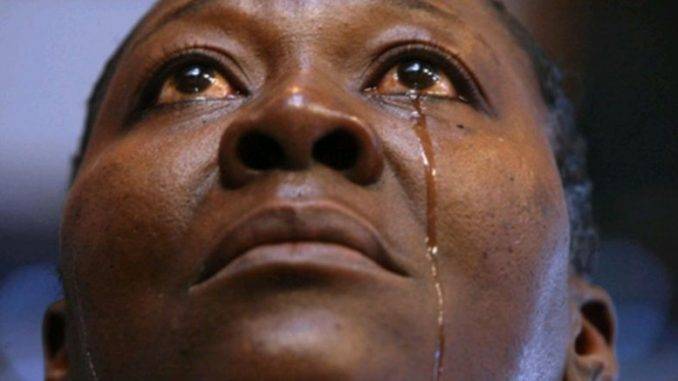 My Husband Will Kill Me If The Police Release Him, Woman Cries Out In Rivers

A woman identified as Josephine Makun has called out her husband over claims that he wants to strangle her to death.

Speaking during a radio programme on Nigeria Info, Port Harcourt, on Tuesday, the mother of three claimed that her husband, whom she identified as Franklin, had been assaulting her for many years, even in the presence of their children.

According to Makun, on January 2, 2021, her husband beat her again and almost killed her.

She said though her husband had signed many undertakings, vowing not to be violent towards her again, he had failed to respect them.

She said, “He was trying to strangle me. He put his knee on my neck and punched me in the face. Then he removed his leg from my neck and used his hand. I pleaded with him and my children also pleaded with him. They cried for help, but he did not bulge.

“I had to beg him that even if he wants to kill me, he should not do it in the presence of our little children. As he pushed the children out, I escaped into the toilet and my son witnessed everything.

“He attempted to murder me, he said it and he held my neck down. The position I found myself was the position George Floyd (A black man whose killing by the police led to Black Lives Matter protests in the US) was in when he was killed in Minneapolis, US.

“That was the exact position that my husband put me in. It was by miracle I escaped that. That was what happened and I found myself in the hospital.”

She also accused police personnel at the Elekahia Police Station where the matter was reported as not taking the matter seriously and planning to release her husband without investigating the matter.

She said, “I learnt the policeman in charge of the case came and they said I was unconscious. Just yesterday the police were pestering my elder son to come because they were looking for a reliable surety so they could release him.

“They have not even come to check me in the hospital or take my statement, they are planning to release him and looking for a reliable surety. And if they release this man, he will kill me because this is not the first or second time (he would attempt it). I have lost count (of the number of times he attempted to kill me). He keeps threatening to kill me. Even during the COVID-19 lockdown, he locked me in the room, broke a bottle and tried to stab me to death.”

According to one of Makun’s children who confirmed her story, his dad is a violent man.

“But my dad said which children. Apparently, he was saying that he didn’t care. That was not the first, second or third time.”