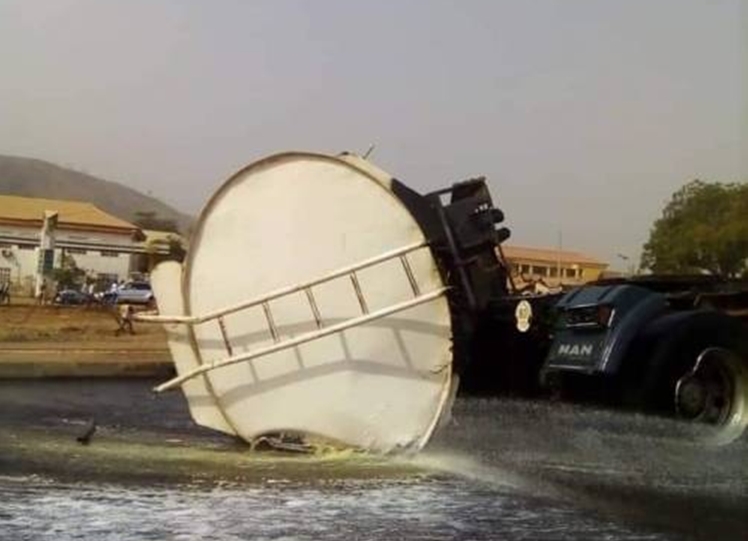 Hundreds of commuters narrowly escaped death on Monday along the Abuja-Kefffi Expressway, when a heavy duty tanker conveying Premium Motor Spirit fell and blocked the entire section of the highway.

Newsmen gathered that the accident happened in the evening during the rush hours when people were heading home from work.

Eyewitness accounts said the accident occurred after the ill-fated articulated vehicle had faulty brakes while descending the Kugbo hill, only to crash opposite the Nigerian National Petroleum Company filling station when its two tyres deflated and the tank hit the ground and started discharging its content.

Officials of Federal Capital Territory Fire Service and other emergency agencies were mobilised to the scene of the incident to prevent the high inflammable tanker from exploding.

The incident caused a gridlock at the ever busy Nyanya interchange with many vehicles trapped while several commuters trekked long distances to their destinations.

Consequently, vehicles were barred from accessing Karu bridge and Nyanya interchange axis of the Abuja/Keffi Road, as rescue officials condoned off the entire stretch of road to avoid a fire outbreak.

The Area Commander of Karu and Garki station of FCT Fire Service Engineer Chukwuemeka Eze, who was at the scene,
said the situation required extreme caution to prevent loss of lives and property in the area.