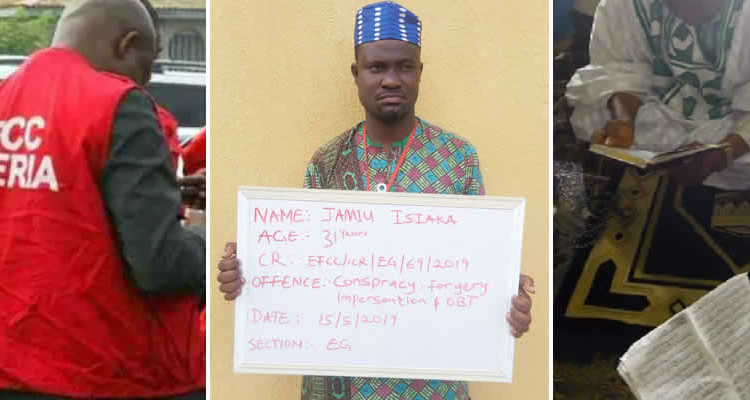 Yahoo business is now a cancer. It is gradually eating deep our moral fabrics as a nation. The business of fraud has not only gained prominence. It has weaken our moral institutions and its journey into ruining spiritual ones should worry us.

Sadly, the journey of ruining our spiritual homes has commenced after it had already dealt with our homes with devastating blows, mocking the very essence of hard work and diligence. Both homes and houses of worship have been bastardized. Homes tolerate yahoo boys and houses of worships accommodate and sometimes promote them.

Greedy parents now seek loans to buy computers for small boys and enroll them into ‘Yahoo academy’. Some parents do not allow their children to complete secondary education before they enroll them into this academy since it requires no certificate than computers and internet connectivity gadgets. That’s the latest damage it has done to our moral institution.

Economic woes such as inflation, hunger crisis and high rate of unemployment have not helped matter too. People now embark on desperate means to survive this harsh economy and peer influence as a major factor is responsible for its growth among young boys.

WITHIN NIGERIA had earlier published a report of how Alfas, pastors and herbalists engage in money ritual before ‘extremists’ take over. Recent developments showed that these ‘persons’ have started using their ‘knowledge of secrets’ to complement their fraudulent acts in their quest to become rich. They no longer help fraudsters alone, they also help themselves too. This sad development cuts across all religions but our focus is young Alfas.

This reporter traced the intrusion of yahoo business into Islam, the religion of Allah through young Alfas. It all started when fraudsters patronize these young Alfas for ‘voodoos’ or ‘secrets of the dark’. These young Alfas claim to have powers to manipulate or control clients to do their biddings. They claim to understand the secrets of the dark. So yahoo boys seek their spiritual support to either tame, manipulate or dupe clients and they compensate the Alfas through certain percentage after the success of every deal.

Wickedness is indeed a food. The more one consumes, the more the gut expands. An undercover investigation by WITHIN NIGERIA revealed that some young Alfas are already in the Yahoo business. Some young Alfas have abandoned their pursuit to support fraudsters and learn the skills themselves. Like civil servants and businessmen, they use religion to cover their tracks and engage in fraudulent acts in secret.

When this reporter visited a young Alfa identified as Ridwan (not real name) as a prospective yahoo boy in Osogbo, the capital of Osun state, the cleric fondly called ‘Yahoo Alfa” firstly narrated how difficult it would be to scam clients without spiritual backup.

He further stated that success is not easy and it requires extra effort to be successful in this life. He commended the decision of this reporter to seek spiritual help and vowed to do everything in his power to make sure this reporter becomes a successful yahoo boy.

While explaining in details extra efforts to be done, a WhatsApp notification popped up on the iPhone Pro Max he placed on the table. He read the message and quickly made a call asking for rate of a particular gift card. Barely 30 minutes, a group of young boys arrived the residence and this reporter was quietly discharged by the Alfa who fixed a new date for meeting. All efforts to get in touch proved abortive as he claimed to be busy and involved in some spiritual dealings.

This reporter also visited another cleric fondly called ‘Ola Sheu’ who happens to be a ‘yahoo apologist’ in Ikirun. According to Ola Sheu, yahoo boys are unpaid contractors retrieving our stolen funds from the white people.
While citing poverty as a dog or chain, Ola Sheu told this reporter that Nigeria should be grateful that yahoo boys are breaking the chains and running the economy. The young cleric cursed those responsible for arrest  and prosecution of yahoo boys.

The cleric simply identified as Ola Sheu who did not deny being a ‘yahoo boy’ stressed that he who has not sinned should cast the first stone. He further stated that he has gained a lot from associating with yahoo boys, saying I will seek God’s forgiveness whenever I’m ready because he is all-forgiving.

Another cleric identified as Alfa Nuru (not real name) told WITHIN NIGERIA that it is likely impossible to see any Alfa that is not doing ‘Jalabi – spiritual work’ to survive and yahoo boys are our major customers.

He said: It is true that some young Alfas are doing yahoo business but majority are just spiritual helpers to yahoo boys. People no longer patronize Arabic schools like before.

‘Set up an Arabic school in your street and see the low turn-out. No financial assistance from government and we need to survive’, he added.

From Arabic studies to Yahoo Business

Findings by WITHIN NIGERIA revealed that there is no Arabic institute in Nigeria that has entrepreneurship course in their curriculum. Most institutes with touch of western education share same fate. When they graduate, they release majority of them to the public that offers little or no opportunity to the table of young Alfas after graduation. They tend to depend on people for survival or find any possible means to survive.

Ustadz Abdullateef Adekunle in an interview with WITHIN NIGERIA expressed his concern about this sad development.

According to the scholar, young Alfas would set up Arabic lesson (Ile – Kewu) and ceremonies as they either work as a teacher in a school or set up any business they prefer.

He added they rely on rich, generous people among their members to fund their activities and that was how they were able to survive then but things have changed drastically now.

Arikewuyo told this reporter that endurance is gone, patience is no more and the spirit of resiliency is dead.

“Most young Alfas now ride flashy cars and live in big houses. They now wear expensive clothes and engage in competition during ceremonies. When you ask them where they get money, they say it’s God’s blessings. They can not explain how because they have no work God can put his blessings upon”, he added.

He further stressed that young Alfas now see themselves as god fathers to yahoo boys and also engage in fraudulent businesses.

According to Arikewuyo, they set up Islamic foundation or organisation populated by Yahoo boys and run the activities by their funds.

“They sometimes ask these fraudsters to engage in sponsorship of religious activities to appease God for forgiveness. They defend fraudulent activities in their sermons and mock people fighting against the dominance of fraudsters”, he added.

Another scholar identified as Ustadz Wahab Abdulfatai said there must be opportunities these young graduates can tap after graduation.

Wahab also stated that there must available funds to assist in setting up desired businesses after graduation.
“Entrepreneurship courses and farming must be compulsory and not taken with levity hands. It must not be from Arabic Institute to Yahoo business. This sad development must be addressed and jointly tackled”, he added.

The growing population of young Alfas involving in Yahoo business is alarming. From Kwara to Lagos to Oyo to Osun to Ekiti to Ondo. Truly, yahoo business is a cancer. We all must wrestle against it.