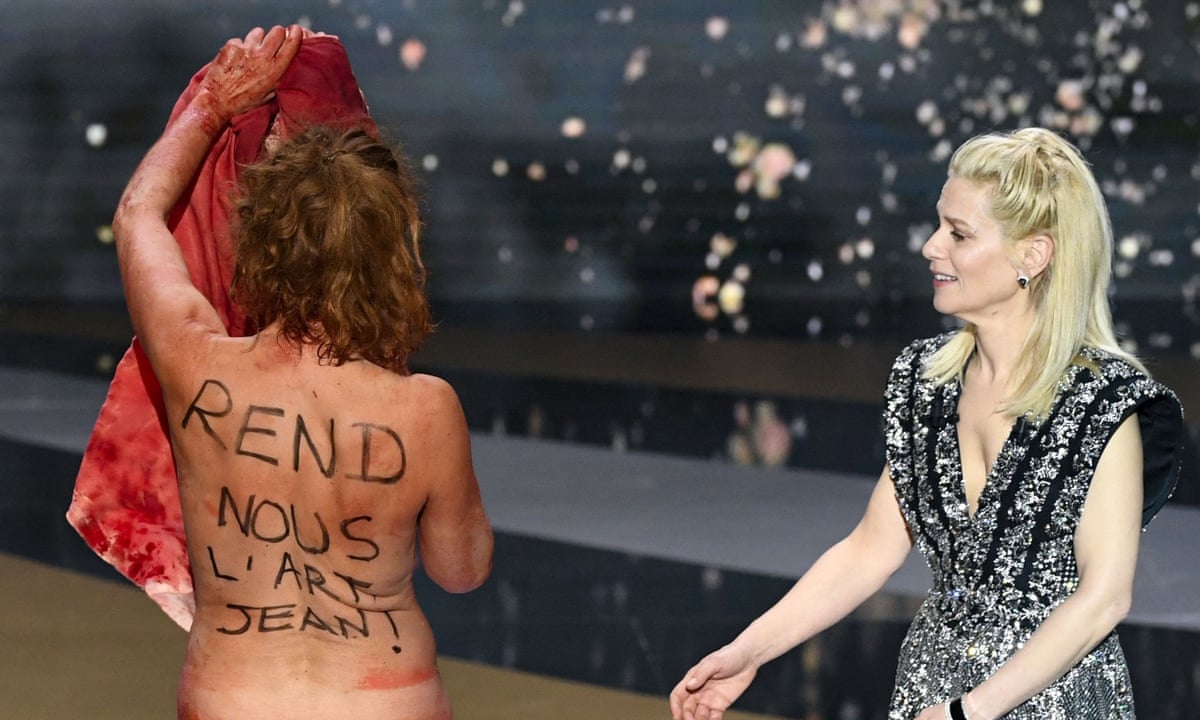 As a way of protesting the government’s months-long closure of theatres and cinemas during the coronavirus pandemic, French actress Corinne Masiero stripped naked on stage during a scaled-back Cesar Awards ceremony in Paris.

Written on her chest was “no culture no future”  and “give us art back Jean” on her back, in a message to Prime Minister Jean Castex.

Masiero, 57, was on stage to present the award for best costume, wearing a donkey outfit and a blood-stained dress before she stripped before the audience.

France’s answer to the Oscars, the ceremony is in normal times the biggest night on the French cinema calendar, but on Friday there were no flashbulbs on the red carpet and no partners on the arms of award nominees.

The ceremony took place at a theatre as anger and frustration grows amongst actors, musicians and artistes at the government’s unwillingness to set a date for the reopening of museums, galleries, concert halls and movie houses.

Marina Fois, one of France’s best known comedians, took aim at the government’s months-long closure of theatres and cinemas during the coronavirus pandemic in a searing speech to open the ceremony.

Fois, who hosted the night, took a swipe at Culture Minister Roselyne Bachelot for finding time to write a book during the COVID-19 crisis and said: “I’m losing confidence in you.”

Nor did she hold back from attacking the French government’s broader strategy to counter the COVID-19 crisis, as cases in the country topped 4 million.

“They cooped up our youngsters, closed our cinemas and theatres and banned concerts so that they could open churches, because we’re a secular country, so that old people could go to church,” she said. The majority of French people are Roman Catholic.

Across the capital, several dozen protesters were occupying the Odeon Theatre for an eighth night demanding cultural venues be reopened and more financial support. (Reuters/NAN)