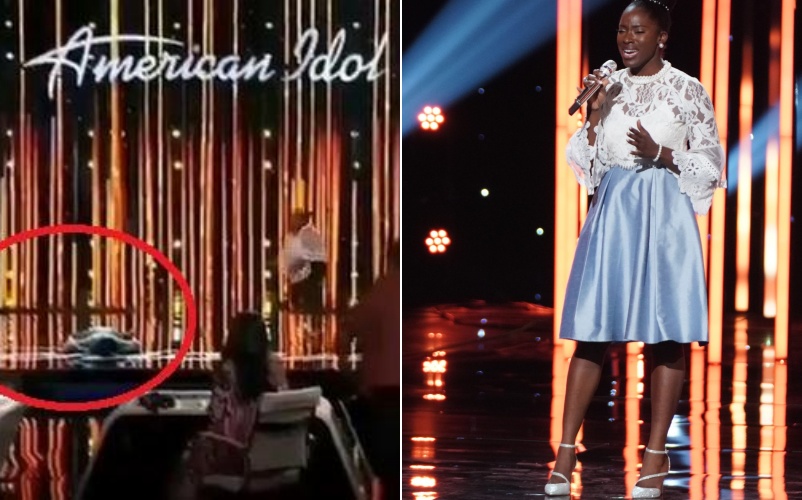 Funke Lagoke, a former beauty queen and an American Idol contestant, was rushed to the hospital after she fainted and fell flat on her face after her performance with fellow singer Ronda Felton on Monday night’s episode of the reality music show.

The terrifying incident happened while she was receiving feedback from the judges after her performance with her fellow contestant and duet partner.

The pair performed ‘Tell Him’, a song written and recorded by Barbra Streisand and Celine Dion.

Here is their performance below:

In a clip from the episode, Funke’s hands can be seen shaking as judge Lionel Richie was critiquing their performance of “Tell Him.”

“Funke, you got yourself to the end. The problem is … ” Richie said before Lagoke fainted, landing with an alarming thud.

Here is the fall:

Richie and Panelist Luke Bryan immediately ran onto the stage to help staff members attend to Lagoke before she was rushed to the hospital.

The show later revealed that Lagoke had been “treated for dehydration and released from the hospital.”

“She will return for the showstopper round,” the statement added.

Richie, 71, told Felton that she and Lagoke had both advanced to the next round.

“Both of you deserve to go through,” he said. “I want you to know, congratulations, okay? I know that was traumatic, okay? But we’re here for you. We’re family, okay?”

Despite the happy news, Felton still looked worried over her duet partner, saying: “She’s gotta get some stitches.”

Katy Perry then added, “But she’s gonna come back tomorrow and she’s gonna be singing for showstopper.”

“I’m just worried about her health more than anything. I feel like that’s the number one important thing right now,” Felton said in a confessional. “I just want her to know that I love her, that I care about her. I want her to be okay.”

Funke, whose name is Funmike Lagoke, is a former Miss Nigeria USA winner. She competed in the beauty pageant back in 2019 and won the title.