‘Unless I’m with your destiny, two missed…

Dencia has come to the defence of Davido after Ghanaian dancehall musician Shatta Wale shades the Nigerian pop star following the purchase of his luxury Rolls Royce 2021 automobile.

Shatta Wale claimed on his SnapeChat that Davido is living off his father’s wealth unlike him who is working hard to create his own wealth.

Shatta Wale wrote, “Lately this money been telling me to buy any car of my choice Me: Well!!! do it cuz you got shelters not shelter.. I don’t use my father’s money for hype I use my own money to do my own real shit.. Real hustlers are real money makers!!! We started from the bottom now we are here!!!”

He didn’t stop there, Shatta Wale bragged about his collaboration with Beyonce. “I’ve not been signed to a label in America yet, but I’ve been recognized by Beyonce so just imagine when I get signed, I will have a song with nebu kad nezar”, he said.

The Cameroonian singer, Dencia, joined the conversation, headed for her Instagram Stories to retaliate on Davido’s behalf. She shut Shatta Wale up and lambasted him for making no money off the duet he recorded with Beyonce.

The beautiful fashionista also rebuked him for not helping new talents grow, instead he charges them before collaborating with them on songs. Dencia noted that Shatta Wale’s act was an “example of why Africans are backward”.

She added that money is more valuable than fame sometimes, however, since Shatta Wale didn’t make money from his Beyonce-feature, he had no say. 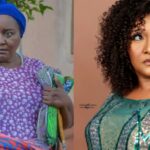