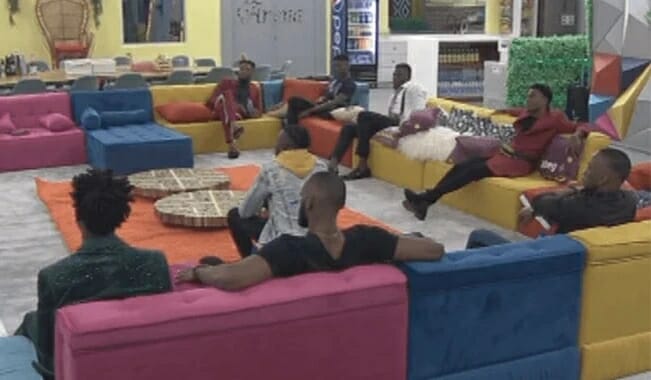 Hours after Big Brother Naija reality TV show, Season 6, began, the male housemates have revealed how they are going to welcome the female contestants to the BBNaija House today.

Recall that BBNaija Season 6 tagged Shine Ya Eye kicked off last night with organisers of the show unveiling the male contestants and ushering them into the house.

The female contestants are expected to join them in the house today.

While chatting in the house this morning, the guys revealed the prank they will play on the ladies on their arrival.

One of the housemates, Pere, said they will pose as ushers and direct all the females into a certain room as they step into the house.

The others who were in agreement said they won’t say a word to the ladies but make hand gestures directing them to take a passage into a room.

Another housemate, Emmanuel, said the ladies, on stepping into the house, will know that guys have already been there before them.

This appears obvious since the guys will be the ones to usher the ladies in, according to their plan.

However, Pere makes us understand that the guys will all have trousers covering their heads, obviously to conceal their identity.

This might make the ladies, who must be familiar with previous seasons of the reality TV show, mistake them for the Ninjas who usually feature in the show.

“Big Brother can tell us to do it. You know it’s possible,” Emmanuel said as the guys expressed excitement about the plan.

“He doesn’t even need to tell us. He can hear us and knows we are going to do it,” Pere replied.