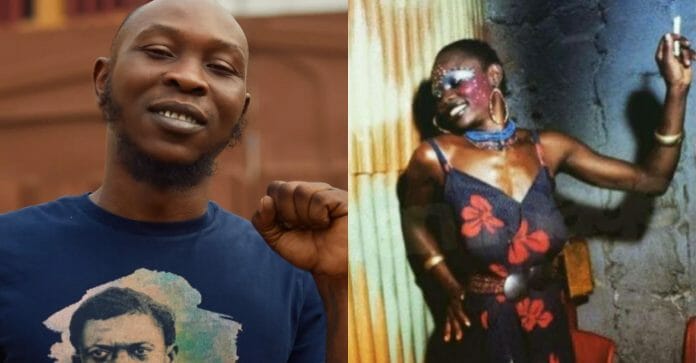 Seun Kuti, the son of late Afrobeat icon Fela Anikulapo Kuti, has replied those criticising him over his recent revelation that his mother hides to smoke marijuana with him in his room.

The musician on Wednesday, August 11, 2021, in an interview with Nicole and Moet Abebe said his grandmother was not aware his mother smokes weed.

Seun Kuti’s comments generated reactions on social media as some of his critics lambasted him for saying such about his mother. He, however, hit back at his opponents in a new Instagram post where he pointed out that they need black Jesus in their lives.

Seun added that there are pictures and videos of his mother smoking publicly. He then dubbed his critics ‘crazy’. In the post’s caption, he stated that more psychiatric clinics should be built to employ the graduates, criticising him to the mental health and wellness profession.

He wrote; “There is madness going around in the UAR. 🤣🤣🤣🤣🤣 Make una no worry. @mopcentre will build plenty psychiatric clinics and gainfully employ our teeming graduates in the mental health and wellness profession and also Y’all need black Jesus!”