Uche Ogbodo, a Nollywood actress, has lambasted a social media user who insulted her.

The fan attempted to shut the actress up when she contributed to Lota Chukwu’s Tweet, advising male actors to get multiple streams of income to be able to afford exotic items like their female colleagues.

Uche Ogbodo then responded to Lota Chukwu’s post, she queried that where do people get the silly idea that Nollywood doesn’t pay well to earn actresses expensive houses and luxury cars.

The fan replied Uche Ogbodo, told her she hasn’t made up to a million Naira since she started acting. “@ucheogbodo abeg rest! You wey dey act since years back. have you earned up to a million in a movie? She stated the fact. You must not show yourself everytime. Rest!” the bully wrote.

In retaliation, Uche Ogbodo knocked the bully and described him as a fool who has no sense. “@officialugeed you no get sense! Attack the system, not the person. Mugu,” she wrote. 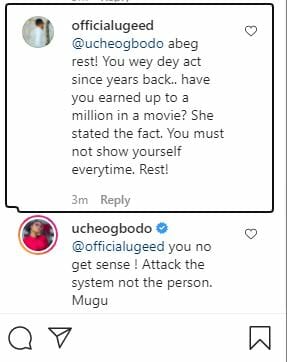