Controversial Nigerian singer Temmie Ovwasa has criticised God for being best friend with David, who she dubbed a rapist, while stating that Jesus is not worthy of her.

The former YBNL signee reiterated she is a lesbian and wants nothing to do with Jesus and Christianity. In her post on Twitter, she made some sacrilegious allegations against God and Christianity.

Temmie said that ‘Christianity has no superior hold on morals’ with the claim that their God impregnated a child. Read her full post below;

“Stop introducing Me to Jesus like I’m not a Lesbian, is he going to eat my p*ssy? I might be worthy of him, but He’s not worthy of me.

“I genuinely think that Christianity has no superior hold on morals if their God had to impregnate a child. If God is all knowing and pedophilia isn’t okay now, then it wasn’t okay yesterday, today and forever. Hallelujah. Before then, this God was besties with David the rxpist,” she wrote. 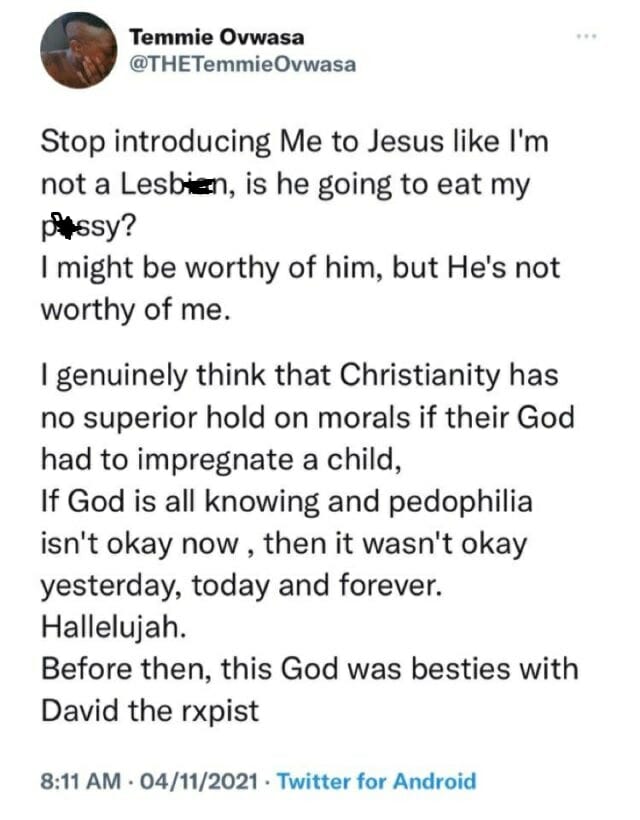