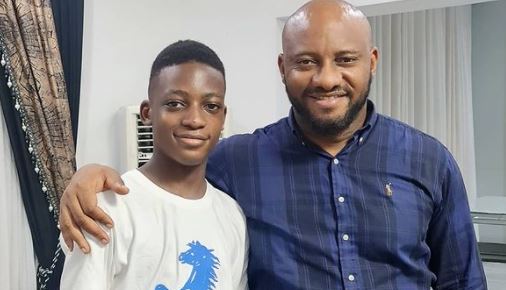 Nollywood actor and presidential aspirant, Yul Edochie has taken to social media to heap praises on his first son Kambi as he turns 15 today. The proud dad took to his Instagram page to share a lovely photo of himself and his son accompanied with a sweet caption.

Yul wrote, “My first son just turned 15. Happy birthday to you Kambi Leo Yul-Edochie. Many more great years I wish you with loads of accomplishments and greatness. May God be with you always. Daddy loves you.”

Though Kambi is the first son, he is the second child of the actor who has four children in his 17 years of marriage. Yul, the last child of veteran actor, Pete Edochie, married his wife, Mary, at the young age of 22 after they both dated for six years.

He followed in his father’s footsteps and made his debut in the movie industry a year after his marriage. In their 17 years of marriage, Yul and his wife are blessed with four children Danielle, Kambi, Karl, and Victory Edochie.