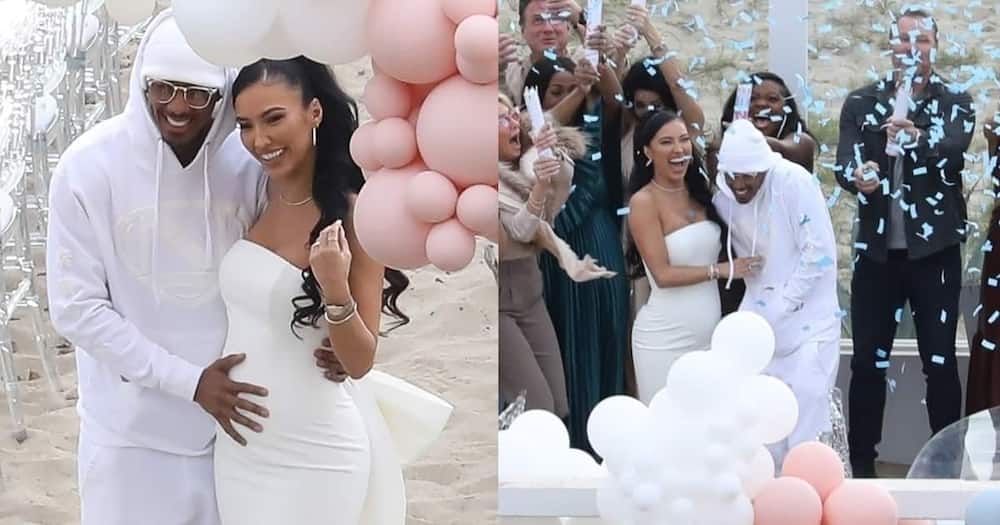 The popular actor is expecting his eighth child, with Bre Tiesi who recently held a lavish baby shower in Malibu.

During the bash, they also are said to have unveiled that the baby is a boy.

In photos obtained by the American website, Nick can be seen dressed in a white tracksuit and wrapping his arm around Bre.

Bre cradles her bump in a figure-hugging white dress and the duo are surrounded by a group detonating confetti cannons.

Nick tragically lost his youngest son Zen, who he shared with model Alyssa Scott, to brain cancer in December.

The 41-year-old is father to twins Monroe and Moroccan, 10, who he shares with ex-wife Mariah Carey.
He is also a doting parent to Golden “Sagon,” 4, and Powerful Queen, one, with model Brittany Bell as well as twins Zion Mixolydian and Zillion Heir, 7 months, with Abby De La Rosa.

In December, comedian and TV presenter Nick broke down in tears as he shared the devastating news that Zen died from a brain tumour.

He shared the tragic news with viewers of his Nick Cannon Show and it was a shock to fans as he had kept the little one’s diagnosis a secret.

Nick said on the show that Zen’s brain tumour had grown at a rapid pace.

He said: “Over the weekend, I lost my youngest son to a condition called hydrocephalus…brain cancer.

“It’s tough. And I have my therapist here, who’s been helping us through it.”

Nick said that Zen’s condition had taken a turn for the worse over Thanksgiving and that the tumour grew very quickly after that.

Giving the background of Zen’s health battle, Nick said he had started to develop what they thought was a sinus issue at around two months old.
“We didn’t think anything of it,” Nick said of the time. “But I wanted to take him to the doctor for his sinus and breathing. We thought it would be routine.”

Nick spent last weekend in California with his son, and on Sunday, took a trip to the ocean where Nick held Zen for the last ever time.