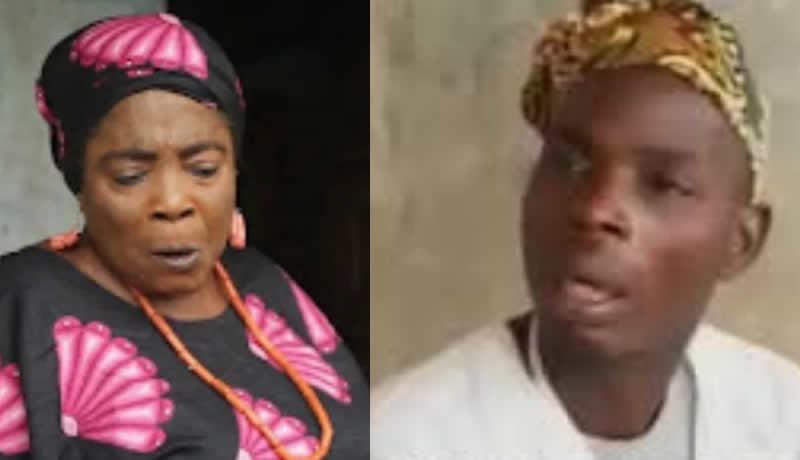 Yes, life is temporal and vanity. Grim reapers only kill the body, take away the soul and put relatives of the dead ones in sorrow but can not clear ‘deeds’ of the slain ones. A life lived either long or short is compendium of events which must be revisited at intervals.

People die and mourn every second. While I maintained that every life has a worth and deserved to be remembered but there were some special persons on earth whose lifestyles and interactions were truly a compendium of events. Popular Yoruba comedian and fuji artiste, Tajudeen Akanmu popularly known as Koledowo was indeed a special person who lived his life with a different style.

On a ‘noisy and dusty’ morning, WITHIN NIGERIA reporter travelled to Osogbo, the hometown of late Tajudeen Akanmu popularly known as ‘Koledowo’. The journey was rough and tiring following technical failures the commercial bus experienced. The deplorable state of Oke-Ayepe’ road especially the crazy potholes and abandoned drainage did not help situation too. From the NSCDC Osogbo command to Oja-Oba market, it was a disastrous adventure. A 7-month pregnant woman can loosely deliver a baby as a result of the effects and responses from the ‘crazy potholes’ that characterised the deplorable road.

At the end of the stressful journey, this reporter alighted at the popular Oja-Oba market square. ‘Aiege’, the family compound of popular actor and fuji maestro, Tajudeen Akanmu (Koledowo) is located in ‘Itaolokan’ in Osogbo. The distance between ‘Itaolokan and Oja-Oba market‘ is trekable because ‘Aromole’ is the only street in between the duo.

The pathway linking the ‘deplorable Osogbo-Ilesa road’ to the family compound of Tajudeen Akanmu Koledowo is directly opposite the popular “Workers’ drive road”. If there were no shops or kiosks beside the road, the family house of popular fuji maestro and comedian, ‘Koledowo’ would have faced the main road. Just walk in carefully through this narrow path, take a sharp turn and gently place your leg across the gutter. That is Aiege, the family compound of late Tajudeen Akanmu popularly known as Koledowo, a native identified as Kazeem advised.

The entire compound was very quiet when WITHIN NIGERIA visited on a Monday afternoon except for the bleating of goats. A normal setting of an African family compound characterised with old houses in dire need of renovations. As at the time of visitation, the doors of most houses were closed but there was an aged man who sat very close to the balcony of a storey building listening to one of songs of legendary Odolaye Aremu being played from his radio set. The lyrics from the song focuses on world and its sanity. This reporter came to write about the lifetime of a popular comedian and fuji maestro, Koledowo who died 14 years ago too. What a coincidence!

Tajudeen Akanmu popularly known as KOLEDOWO’ was born on 1954 to the Aiege family of Osogbo at Itaolokan, Osogbo. Findings by WITHIN NIGERIA revealed that Tajudeen Akanmu can read and write but we could not ascertain the names of primary and secondary schools he attended. A close relative told WITHIN NIGERIA that Akanmu alias Koledowo grew up as a child who loved to make people laugh with jokes and songs.

Koledowo was also a beneficiary of Ajileye’s outstanding talent and became well known across the Yoruba states after he featured in Koto Orun, a popular Yoruba film produced by late Alhaji Yekini Ajileye.

Koledowo was not just a comedian but a talented Fuji artiste. His musical talent took him to Lagos state where he performed at ceremonies mostly carnivals but later came back to his hometown, Osogbo and cited the expensive life of Lagos as an excuse. A group of commercial drivers took him to Osohodi in Lagos where he spent months, moving from one stage to another while displaying his artistic values.

He continued his acting and musical career in Osogbo and was widely known across the nooks and crannies of Osun state and beyond. But he is famously known for his comic acts in movies and most people including fans know and prefer him as a comic actor than being a fuji artiste.

His second wife is a trader who has a shop at the popular Oja-Oba market, the first wife deals with Kampala designs and wears in Osogbo while the third wife is a popular Nollywood actress identified as Odukanmi Kudirat Oluyemi better known as Iyabo Oko. These are the wives the popular Yoruba comedian and fuji artiste, ‘Koledowo’ publicly identified with and can be easily traced.

A close friend and colleague told this reporter that the relationship between the late comic actor, Koledowo and Nollywood actress, Iyabo Oko started on a secret note before it now advanced to open relationship.

The day Koledowo told us that he was dating Iyabo-Oko at a location set, we were all surprised. Iyabo Oko was a very beautiful woman with nice shape then. She was a toast of all and how Koledowo ended up being her lover marvelled us, he told WITHIN NIGERIA.

A check by this reporter revealed that the close relationship was not in vain. Popular Nollywood actress, Iyabo Oko gave birth to a beautiful daughter identified as Oduola Olamide during their courtship. The girl-child now an adult shares same intimidating physical traits with Koledowo. Other wives also gave birth to children (males and females) in which one of them is now a fuji artiste and has also featured in some local movies too.

A reliable source told WITHIN NIGERIA that some years ago when late Babatunde Omidina was very famous, Koledowo invited him to his location set. The late Adimeru charged him the sum of N150 and also demanded for transportation fee. They started the film project but they did not see late Babasuwe.

“The only means of communication then was landphone. Koledowo went to where he could access landphone and reportedly got in touch with Babasuwe”, he added.

According to the source, Babasuwe requested for another payment and Koledowo sent another N150 to him. Despite the fresh payment, Babasuwe did not show up at the movie set.

“Some years later, late Tajudeen Akanmu alias Koledowo now became a star and late Babasuwe needed him to feature in his movie titled ‘Omo lasan’. Babasuwe called Koledowo and invited him to feature in the movie but Babawsuwe was afraid to give him money. Koledowo travelled to Lagos and arrived at the location set before the commencement of the movie, the source narrated.

How Popular Yoruba comedian and fuji artiste, Koledowo died in a rented apartment

A reliable source who spoke with WITHIN NIGERIA confirmed that the ace comedian purged for days before his last breathe. The source also disclosed that Koledowo was a ‘heavy weed smoker’ when he was alive. Other sources confirmed that he was truly one when consulted.

‘I advised him to go and do test at the teaching hospital but he ignored my advice. He said he was recovering and have taken herbal drugs. Infact, we both went out to eat pepper soup at our regular joint. So when I heard that he died the following day, I did not believe until I saw his corpse’, the reliable source stated.

According to the source, he was buried in his father’s house because he had no house and was living in a rented apartment until his demise.