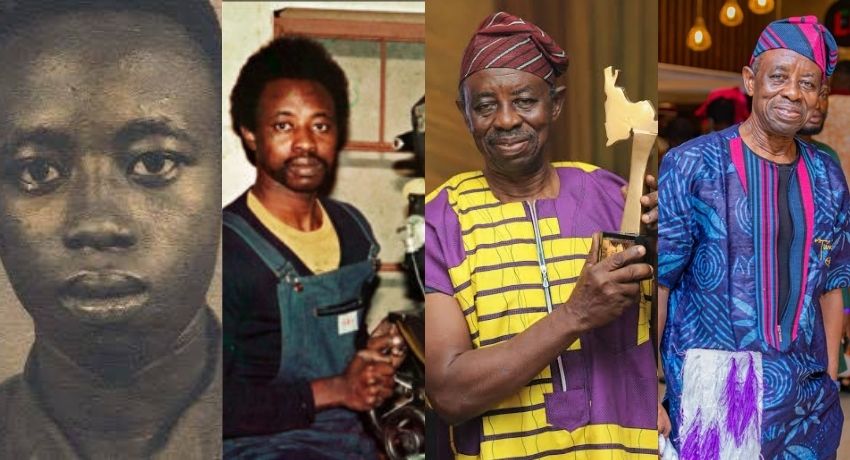 Birthdays happen once a year and they should be acknowledged, even celebrated. It’s important to also remember our veterans who have played their part well in building the entertainment industry while they are still alive and kicking.

Today, Tunde Kelani, popularly known as TK, is an household name. He is a Nigerian filmmaker, storyteller, director, photographer, cinematographer and producer.

He was born February 26, 1948; As TK clocks 74 today, WITHIN NIGERIA brings you interesting facts about how an ordinary photographer apprentice became an Oscar juror in 2019, and his inspirational journey till date.

Tunde Kelani was born in Lagos but at the age of 5, he moved to the ancient city of Abeokuta to live with his grandparents.

His grandfather was the ‘Balogun of Ijaiye Kukudi’, which meant TK had access to the different sides of Yoruba culture and worldview. This would later reflect in his most celebrated works.

He got interested in photography from primary school and began investing money and taking to time to learn photography. So, inevitably, he became an apprentice photographer after he finished secondary school. Later, he trained at the then Western Nigeria Television (WNTV) and went further to attend London Film School.

In the 1970s, while in London, TK worked for the BBC and Reuters, covering the Ethiopian drought and travelling to Zimbabwe thrice to cover the nation’s independence.

TK’s co-produced his first movie, The Dilemma of Reverend Father Michael (Idaamu Paadi Minkailu) with Adebayo Faleti, a Nollywood icon and the first-ever Yoruba news anchor in Nigeria. He did so well that other cinematography gigs followed some feature films, including Anikura, Ogun Ajaye, Iya Ni Wura, Taxi Driver, Iwa and Fopomoyo.

By 1990, Tunde Kelani acted in the first American movie to be shot in Nigeria titled Mister Johnson – an adaptation of the 1939 novel by Joyce Cary. Pierce Brosnan and Maynard Eziashi starred in the film. He was also an assistant director.

In 1992 he founded the iconic Mainframe Film and Television Productions company to promote the Nigerian culture and beliefs through high-quality movies. TK wanted to produce his films instead of just providing technical support for others.

Tunde Kelani had developed a soft spot for both English and Yoruba literature from the time he spent growing up in Abeokuta and his adaptations of books and plays for the film are the core of Kelani’s filmmaking practice.

Through Mainframe, he has produced movies such as:

A couple of these films are classic Nigerian films and fantastic film adaptations of various books.

A week ago, TK revealed plans to produce and release a film on the late Fuji music creator, Dr. Sikiru Ayinde Barrister (a biopic) after a successful outing on Ayinla – an eponymous musical genre on the late Apala musician, Ayinla Omowura, which was produced by Jade Osiberu and said to have grossed 92 million naira from the cinema exhibition only.

He is a 74-year old avid reader who has never worn a pair of glasses his whole life.

TK is unarguably Africa’s most researched film Auteur — as a film director, he has the gift of influencing his films so much that they rank as their author. One can hardly tell he only directed (he didn’t write) many of the movies his name is attached to.

Interesting since he became a household name,  TK has never be caught wearing outfits that don’t promote his culture. He is always on adire outfits, adire-themed outfits or native wears (Ankara, òfì, etc) and he never forgets his native (òfì) cap. The (òfì) cap is also his signature, a core part of his outfit.

Years back, when filmmakers weren’t making well-scripted, high-quality movies, and film production was very rudimentary. Tunde Kelani (and others like Tade Ogidan) insisted on making films with better direction and better stories. This major decision made TK stand out amongst his pairs.

He went on to influence works like Irapada (2006), The Amazing Grace (2006) and The Figurine (2009) by producer and director Kunle Afolayan. The latter is the breakout movie that started the current, cinema-debuting Nollywood era.

In 2019, TK was elected by the Academy of Motion Pictures Arts and Sciences (aka The Oscars) to vote in the Directors Category at future awards.

TK has won multiple awards and mentored several producers and directors in the Nigerian film industry.

Currently, Tunde Kelani doubles as a fellow at the Federal University of Agriculture, Abeokuta, Ogun State.

TK is married to Toun Kelani and the union has produced three children.