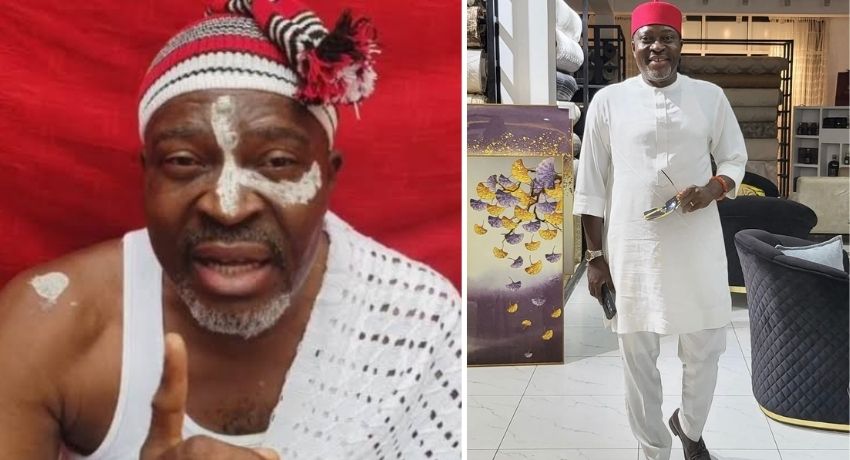 Nollywood actor, Kanayo O. Kanayo today, March 1, 2022 clocks 60. He was born in the year 1962 and has been in the Nigerian movie industry popularly known as Nollywood for over two decades and still counting. WITHIN NIGERIA brings you interesting facts you probably didn’t know about this prominent actor.

Many do not know that Kanayo O. Kanayo’s (KOK) real name is Anayo Modestus Onyekwere. KOK is just a nickname.

He is a Nigerian actor, politician and lawyer who made his debut movie appearance in the film Living in Bondage in 1992.

In 2011, KOK contested for the chair of the House of Representatives of Imo State under the political party APGA but didn’t win.
In 2019, a relentless KOK tried again but lost to Mr Martins Emeka Chinedu who is also his Kinsman.
Kanayo O Kanayo became a professional lawyer in 2020 at age 58.

KOK is popular for acting typeset roles in the movie industry thereby always featuring in majorly occultic films, so much so that many people believe he is an occultist off screen; a belief he has vehemently denied on several occasions.

In January 2022, he joined other latest Nollywood actors to bag a chieftaincy title.

He was born in Ahiara, Aboh Mbaise Local Government Area of Imo State in the south eastern part of Nigeria to Mr. Donatus Onyekwere and Mrs. Isabel Onyekwere.

In 1992, KOK joined the Nigerian movie industry popularly known as Nollywood professional and became highly famous after starring as Chief Omego in the Nollywood blockbuster movie Living in Bondage.

In 2000, Kanayo O Kanayo won the award for Best Actor in a Supporting Role for his role as Chief Omego in the Nollywood blockbuster movie Living in Bondage at the Africa Movie Academy Awards.

KOK is a divorcee whose former union with Nneka Onyekwere produced and has four children, two girls and two boys respectively.
Kanayo O Kanayo is one of the pioneers of the Nigerian movie industry popularly known as Nollywood and contributed immensely to the growth of Nollywood in Nigeria and rest of the world. Some of the movies he has acted include Up North, Living In Bondage: Breaking free, Across the Naija, Lion Heart, Professor Johnbull, Circles of Doom, Nneka, Billionaires Club, Rituals, Tears for Love, Living in Bondage, The Coven, Blood Money, and many more.

Kanayo O Kanayo is currently a United Nations Ambassador and has been honored by the Nigerian government as a Member of the Order of the Federal Republic (MFR) being the highest honor and award given to celebrities in Nigeria who have contributed to immensely to the economic growth and development of the country through entertainment.

Asides acting, he is an entrepreneur who has several other businesses, real estate investment, and ambassadorial deals.
Currently, KOK is reportedly worth millions of Naira but he was born without a silver spoon.

Lastly, despite his revelation in an interview a while back that he is not a social media persona, he seems to have upped his game recently. He has been very active on social media especially on Instagram and twitter.