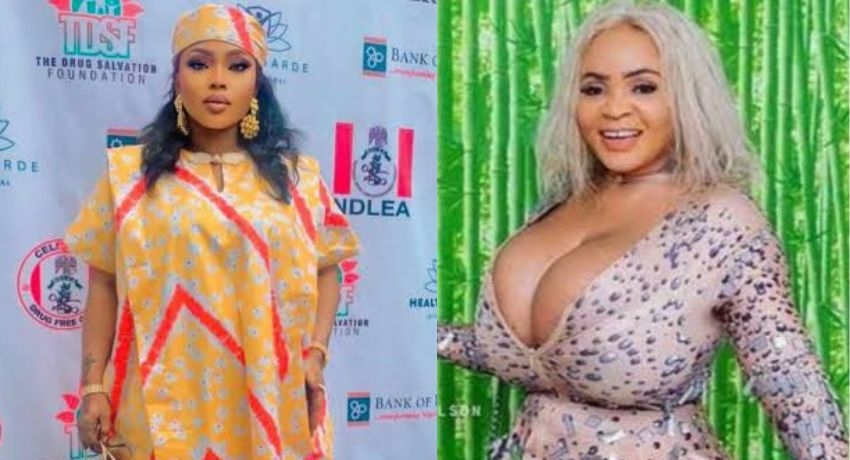 Halima has again been dragged into an argument with another actress.
Ailing Nollywood actress, Halima Abubakar and her endowed colleague, Cossy Ojiakor have engaged in a messy fight on Instagram.

The drama started after rumours of Halima’s affair with Apostle Johnson Suleman went viral. A blogger also speculated that the actress suffered from an infection during the relationship.

Reacting to the rumour in an Instagram post on Monday, Cossy claimed Halima was being punished for slandering her in the past. Cossy wrote:

“Well this was written by person who claim say them use am for ritual, aunty still get power to talks…… yes you tried your best to finish me but then you forgot I was already a landlady before you strike. It was slow but what I’m worth now will make you sit down in your rat hole, shey u done sell your house that is if you actually had one,”

“Like I said my left breast is richer than you and your generation, anyway It’s all about post and delete. Deleting you because ur just a broke infected girl looking for how to make money from whoever. Superman likes women but juju. That’s a fucking lie. If them use you them go done press the remote make burst that ur useless swollen stomach. I no wan see you for any blog I dey follow. If I see you drag anyone I dey come for you.”

Halima Abubakar also took to Instagram to clap back at Cossy as the duo exposed each other’s past. She wrote:

“But seriously I don’t have issues with you, I ignored you for a reason, cos you were mourning. Cheap bitch. Cossy o. Do you need more pictures because it’s not enough on your page. You wey I rescue after so many rapists rape you dey talk. I housed you for a year. No forget Demi is alive and the twins too. Cossy and bribe Na 5 and 6.”

WITHIN NIGERIA recalls Halima Abubakar lashed out at colleague and veteran, Shan George for denying she ever had an intimate relationship with controversial clergy man, Apostle Suleiman.