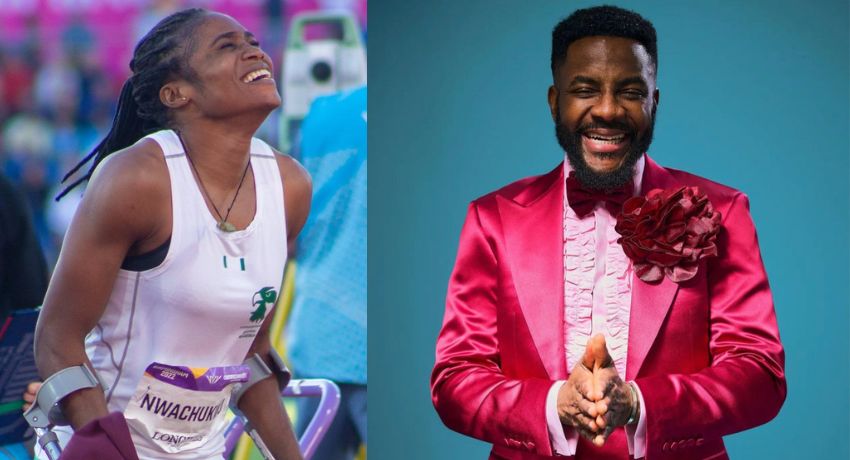 The Big Brother Naija host took to Twitter to congratulate the athlete on the feat. He tweeted:

“Set a world record and then beat it with another throw. Goodness gracious.”

Nwachukwu secured Nigeria’s fourth gold medal at the ongoing Commonwealth Games in Birmingham. She did it in spectacular fashion; breaking the world record twice before claiming the top prize.

The 23-year-old, Nigeria’s sole competitor in the Women’s Discus Throw F42-44/61-64 event, was way better than her challengers; setting new records with her first two throws.

Nwachukwu before now was the F42 World Record holder with the best mark of 33.35m but on Thursday she improved on that distance with her first throw of 34.84m which she further improved upon with a throw of 36.56m.

Meanwhile, before Nwachukwu’s gold medal feat, Team Nigeria had won a bronze medal in the powerlifting event through Nnamdi Innocent in the men’s lightweight category.

Another record breaker Tobi Amusan has qualified for the final of the women’s 100m hurdles at the 2022 Commonwealth Games.

Amusan returned to the track on Friday for the first time since making history at the World Athletics Championships where she clocked 12:12 seconds in the semifinals.

The Ijebu-Ode born athlete caught the attention of the world at the World Championships held in Oregon, United States where she also won gold in the 100 metres hurdles. Her 12:06 seconds timing in the final was not recognised as a world record due to an illegal tailwind.

All eyes are on Amusan to win gold at the 2022 Commonwealth Games.