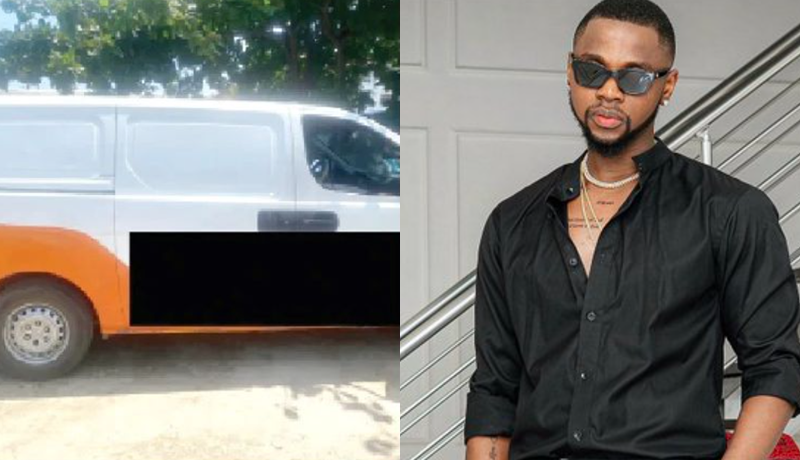 The Lagos State Police Command has condemned the action of music star, Oluwatobiloba Daniel Anidugbe aka Kizz Daniel, for seizing the delivery bus of a laundry service company for allegedly damaging his clothes while rendering services to him.

According to PUNCH, a source said, “Kizz Daniel usually gives his clothes to a dry cleaner; so, he called the dry cleaner to visit his house to pick up some of his dirty clothes. When the dry cleaner’s driver got to his house, he (Kizz Daniel) locked him inside the compound.

“Kizz Daniel said if the laundry company does not pay him N14m, he won’t release the vehicle. The driver pleaded with him but he instructed the driver to leave his house. So, while returning to the office, the driver visited the Ilasan Police Station to make a report.

“Policemen at the station visited his house, recovered the vehicle to the station and officially wrote to him to visit the station for questioning for committing an offence bordering on illegal seizure.”

Contacted, a representative of the laundry company, who gave her name as Glory because she was no authorised to speak on the matter, said all enquiries should be directed to the manager of the firm.

Asked for a number to call, Glory said, “I have to confirm from him first because he is not around.”

She confirmed that the issue between the company and Kizz Daniel has “not yet” be resolved.

The police has reportedly released the bus to the laundry company as investigation into the case was ongoing.

The state Police Public Relations Officer, SP Benjamin Hundeyin, who confirmed the incident said that Kizz Daniel took the law into his hands.

He said, “He unlawfully seized a laundry company’s vehicle. The police went there, recovered the vehicle and invited him over to make a statement as to what happened. We are still expecting him but his lawyer said he would come on Tuesday.

“It is criminal to seize people’s property against their will and the proper thing is prosecution. Nobody should take the law into their hands by seizing anybody’s property. If you are aggrieved or somebody has offended you, seek appropriate redress.

“If it is a criminal matter, go to the police; if it is a civil matter, you can sue the person or seek alternative dispute resolution instead of taking laws into your hands. It could lead to a breakdown of law and order.”