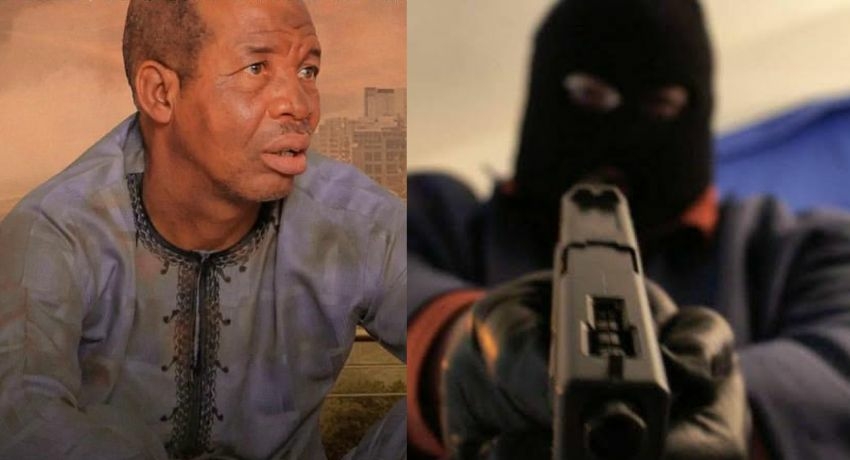 The rate at which some Nigerians are being attacked by unknown gunmen is becoming quite alarming, and a serious cause of concern.

The actor’s friend Kayode Soaga confirmed the incident in a statement. The statement read:

“The Robbers broke into his Home at about 2 am. heavily Armed with Pump action Guns, Matchetes, Breaking in Tools. His security Guards were tied down and demobilised.

“Three other houses on the street were robbed with more devastating effect. They broke the Burglary proof and went straight to him demanding for N20 million or his Life. Threatening to kill and destroy

“He begged and pleaded. They later came down to N3 million  Naira Which he said he doesn’t have. They dazed him with a resounding Slap etc. The Armed robbers Packed all Android Phones, iPhones laptops and all available Cash in the home. Also collected all ATM Cards. The robbers came with POS to empty money in Accounts.

“Saka’s security Guards were demobilised while the Guards of his neighbors were not too lucky as they were shot several times in the arms. We thank almighty GOD for Saka’s Life as he’s doing fine.”

The 59-year-old actor is said to be doing fine with his family after the shocking incident.

Popularly known as Saka, Hafiz is married to Olaide Oyetoro. They have three children.

He has a Master of Arts degree from the University of Ibadan, Oyo State.

The actor who starred in popular movie, The Wedding Party, also has a Bachelor of Arts degree in Theatre Arts from the Obafemi Awolowo University (OAU), Ife in Osun State.

The music artiste stated that he was not sure whether his attackers were kidnappers or robbers but they damaged his car and he managed to escape.

The report on the attack is coming on the heels of the news that celebrity barman, Paschal Okechukwu aka Cubana Chief Priest and his wife, were also attacked by unknown gunmen in Anambra.

The celebrity barman said the attack took place in Anambra, and not in Imo, like many reports claim.

According to the socialite, the incident occurred on Friday on his way to Asaba. Videos of his car with bullet holes were uploaded on Instagram on Sunday, August 7.

Also two Nollywood veterans, Cynthia Okereke and Clemson Cornell were kidnapped, before their release days ago.