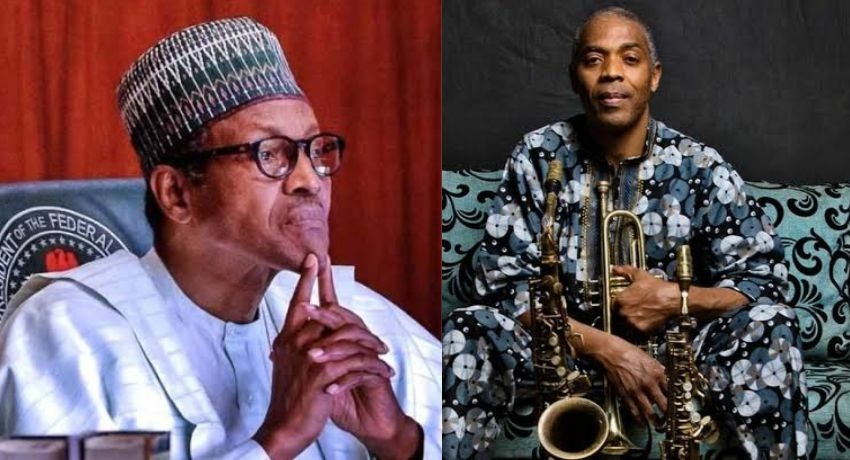 It’s no longer news that many Nigerians are lamenting the poor state of the country and hours ago, Femi began to trend on Twitter for allegedly pulling his weight for Buhari.

“Femi Kuti endorsed Buhari in 2015, I won’t be surprised if he supports batshit. He does not matter in the scheme of things. Baba you welcomed Osinbajo to your house.”

Reacting to the accusation, the 60-year-old stated that although he was approached by Vice President Yemi Osinbajo to campaign for Buhari in 2015, he rejected the offer because of his father. Femi Kuti replied:

“How you all come up with fabricated lies beats me. But why all the lies? You heard me endorse him or ever anyone? Thank goodness the video is on YouTube.”

“To be clear, Osinbajo came to my house to ask me to join their campaign and I told him no, rumours started to spread that I supported them. When he came in front of the crowd was my opportunity to clear it. Go and watch and come back.”

In September 2020, Femi said he refused to join the ruling All Progressives Congress (APC) partly because President Muhammadu Buhari jailed his father.

Buhari was military head of state in 1984 when Fela was jailed on a charge of currency smuggling.

The jail sentence was widely denounced as politically motivated because the singer was a vocal critic of the government.

That experience formed parts of the lyrics for Fela’s 1989 song ‘Beast of no Nation’.