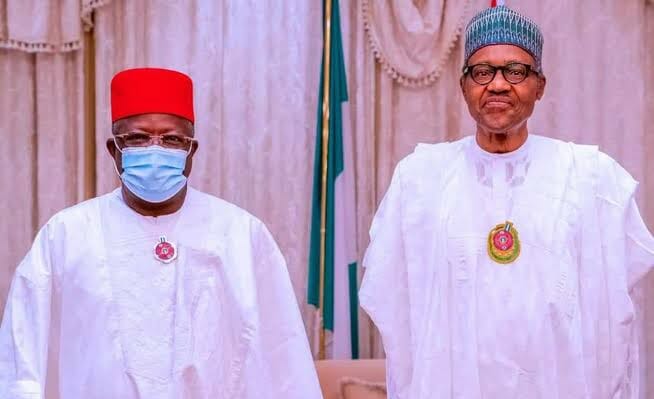 2023: God will give Nigeria President with good heart like Buhari ― Umahi

Governor Dave Umahi of Ebonyi state, Monday prayed that God should give Nigeria a president “who has good heart like President Muhammadu Buhari for the good of this country.”

The governor also said that the people of south East are grateful to President Buhari for what he described as mega projects the President was doing in the zone.

Governor Umahi, who spoke to State House correspondents after meeting with President Buhari at the Presidential Villa, Abuja, condemned the sit-at-home order declared by the Indigenous People of Biafra, IPOB, describing it as the worst thing to happen to the economy of the area.

He said those observing the IPOB’s sit-at-home order even when the separatist group had cancelled the order were doing so out of fear.

He advised those holding federal positions from the zone to always visit their states and identify with their people so in order to help to determine whether the people are marginalized as claimed in some quarters.

The governor commended President Buhari on some landmark projects in South East especially the Second Niger Bridge which he said was becoming a reality, the award of the eastern corridor of the railway line which he said would fast track commercial activities in the area.

On why he was at the State House, he said, “I came to see, Mr. President. One is to thank him very highly for a number of mega projects that he is doing in the southeast. The second Niger bridge is fast and fast becoming a reality. Each time we visit that bridge location it is always like a dream.

“So we the people of South East are very grateful to Mr. President for this. We also thank him for the award of these Eastern corridor of the railway line. This is a project that is going to fast track the commercial activities of our people.

“I recall that when I was in school, I used to join train from my state, Ebonyi and then get up to Maiduguri where my brothers were staying for my holidays.

“And I reminded, Mr. President that the South East governors had requested that I write which I did, but not yet approved by the Honourable Minister of Transport, which Mr. President said he will find out why they were omitted in the first place.

“I am very, very hopeful that Mr. President is going to give approval to those two locations. And also the limestone granos to fast track the fertiliser presidential initiative, which has helped the country Nigeria so much in food sufficiency.

“Let me point out that without the effort of Mr. President, through this fertiliser initiative and other programmes in agricultural sector, it would have been a very difficult time for this country. And so that project is supposed to produce a large set of granules to enable us produce fertilisers to serve the South-South, South East and part of North Central.

“Mr. President has already approved the funds and released to Solid Mineral Development Fund. But part of the requirement is that there must be SPV integration or private sector initiative. They have applied to Mr. President for approval through the Chief of Staff. So we had to remind Mr. President.

“Lastly, four years back, Mr. President was in Ebonyi state about November to commission a number of projects and lay foundation stone to others. I reminded Mr. President that we are expecting him four years later, which would be November for him to come to Ebonyi State. The last time he spent one night but this time we are asking him to spend three nights.

“We have gotten to the stage of completing the best medical center, King David University of Medical Sciences, the best in Africa. We have completed the largest mall, the most beautiful mall you can see anywhere in West Africa.

“We also have a number of ongoing projects. Most of them will terminate at the end of the 2021. Like the International Airport, which Mr. President two years ago gave approval. Now we are the first in the whole Nigeria to build a an international airport runway with concrete that is going to be ready for Mr. President to lay the foundation stone. I will invite him next year to commission it.

“We have the first flight about May 29 2022. We also have a number of road projects, especially the 199 kilometre of Abakaliki ring road, of which the state government has completed with 53 kilometre of it.

“And of course, the limestone granules is Mr. President project and he has to lay the foundation stone.

“So this is why we came and I’m happy that Mr. President, is quite disposed towards visiting us again.”

Asked the South East leaders were working together to make sure that the two major political parties have one candidate from the zone for presidency in 2023, he said, “Well, for me, I’m very much entrenched in completing my projects. And I will look into politics when my tenure is remaining one year, which is from May 29 2022. And I think it is the same thing with other governors of South East and by extension, governors of APC.

“My position about what you ask is that our people that are in those political parties are making the efforts in selling the need for south East to produce the next president. But I think both the governors and Mr. President should not be distracted, when the elections are done and won, it should be governance.

“But in this country, the moment the election is completed, the next one starts. It is the masses that are being cheated. So those whose job are politics and who are not into elected position, or appointed position have all the time and the opportunity to do this conversing.

“But I continue to say that power rest in the hands of God. And God, will also give us the next president who has good heart like President Buhari for the good of this country.

“We need God’s own anointing for our own anointed President for the interest and unity of this country.”

Fielding question on the position of the regional security network, Ebubeagu, he said, “Talking from Ebubeagu position, it’s quite formidable and doing a great job in synergy with all the security agencies. And if you read through the newspapers, you see a lot of exploits that are being done in the South East. It is quite tasking, security wise, and we are tackling it.”

On the promise to address the grievances of the youths over the alleged marginalization the Federal Government, he said, “In terms of the issue of youth protest and my asking as the Chairman of South East Governos to give the leaders six months, well, we are on that matter. We have met with Ohaneze and other Igbo leaders and they have set different committees to articulate the goal. We also as leaders, we want to hear from the masses and hear from those in political offices and appointive offices and, the civil service both at the federal and states on the areas of marginalization.

“Some of them might be illusions, you know, but I continue to insist that our people that are occupying political offices at the federal level, and the civil service should also identify with our people, because a lot of our people in these places don’t identify with their people.

And so we continue to shout marginalisation, we should start from them, they should be able to tell us what they have done. We need to see their faces, we need to identify with them so that the people will appreciate the level of marginalisation so to say. So, this is our position.

We are still going to come with some points, if there are merits to meet with Mr. President, then have data to have a tet-a-tet over the matter, but I think things are getting better in South East. “

Asked what he was doing on the continued Monday sit-at-home even though IPOB has suspended it, he said, “Well, I think it is not more or less complying to the directive of IPOB or no IPOB, suspended or not suspended. It is a question of fear.

“You know, the easiest thing to do is to carry weapon and kill somebody, and that’s what happened in the past. And that’s why some people in South East are afraid of coming out. Even if you go now to the street and say that… or you hold AK 47. You see everybody will desert the street. So it’s not a question of compliance. It’s a question of fear.

“If the security agencies can have enough personnel in the South East, you’ll find out that no South East man wants to miss a day of work. They like to work, they are into trade, commerce, and they want to earn their daily living.