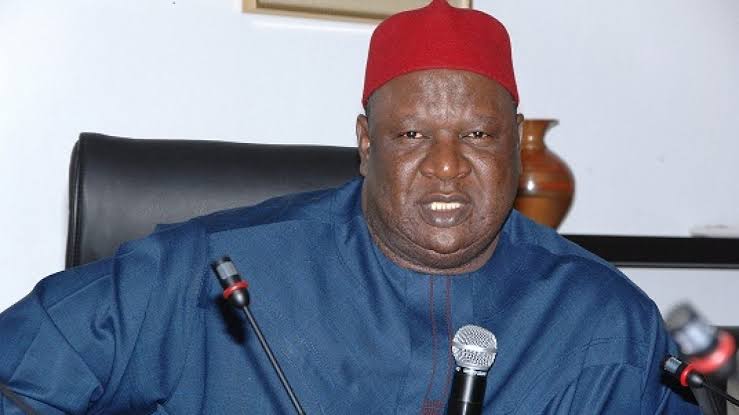 I was never invited by the EFCC ― Anyim

Former Secretary to the Government of the Federation, SGF, Sen. Anyim Pius Anyim, on Wednesday explained that he was never invited by the Economic and Financial Crimes Commission, EFCC, Abuja, but that he went there on his own volition.

According to him, I went to the office of the EFCC on Sunday, when I heard that my name was mentioned by someone who was being investigated by the Anti-graft Agency.

Anyim, who is a Chieftain of the Peoples Democratic Party, PDP and also a former President of the Senate said he waa surprised that after his engagement with EFCC officers, he was not allowed to return home.

Anyim narrated his encounter with the EFCC in a statement by his Media Adviser, Sam Nwaobasi, on Tuesday evening.

The statement read: “Anyim had been inundated with inquiries from friends, associates, PDP faithful and the general public.

“These were with regards to media reports that he was invited and detained “as part of an investigation in a case of alleged corruption and diversion of public funds.”

“It has, therefore, become necessary to put the records straight on what went on between Sunday, 24, to Tuesday, 26 of October.

“Senator Anyim got information that some person invited by the EFCC in connection with some matter it was investigating mentioned his name in the statement made to the EFCC.

“Determined, as always, to ensure that the truth prevails, Senator Anyim reached out to the officer handling the matter and offered, on his own volition, to come over to the EFCC to clarify any issues around which his name was mentioned.

“The officer was delighted and they agreed to meet in his office at the EFCC by 3p.m., on Sunday, October 24.

“At the agreed time Senator Anyim arrived at the EFCC office. He was never invited by the EFCC.

“After his engagement, during which Senator Anyim was as candid as could be, to his utter surprise he was told he would not be going home that day.

“By the next day the EFCC gave the conditions for his release, which were met promptly.

“It took up to Tuesday, 26, for EFCC to complete their processes after which he was allowed to go home

“Senator Anyim, as a law-abiding citizen, will always submit himself to any process required by any agency of the government in the discharge of its duties.

“Senator Anyim, though not disturbed or worried by his encounter with the EFCC, after all he went to their office by himself, has however noted some reports in some social media platforms that deliberately distorted the facts just to call his integrity to question.

“Senator Anyim remains steadfast in his commitment to join hands with men and women of goodwill to unite, heal and advance the cause of our dear country Nigeria.

“He will continue to offer himself and services to the pursuit of same, notwithstanding the blackmail, falsehood, misinformation and misrepresentation that some opportunists will seek to make out of such episodes like his recent encounter with the EFCC.

“Senator Anyim is very humbled and touched by the spontaneous responses and concern shown by his numerous friends, associates, supporters, especially PDP faithful and the general public.

“He believes that together we shall all build a better Nigeria.”