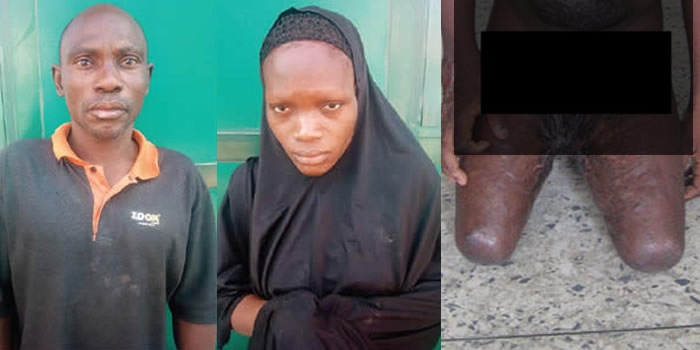 An Abuja-based couple, Ayo and Khadijat Yahaya, are cooling their heels in the custody of the National Agency for the Prohibition of Trafficking in Persons and other related offences for allegedly burning the private parts of their two-year-old son in the Kuje area of Abuja, the Federal Capital Territory.

NAPTIP operatives told newsmen on Sunday that the couple would spend the Christmas holidays in the cell, after which they would be arraigned in court on Wednesday.

Our correspondent learnt that the couple, 43-year-old Ayo and Khadijat, 30, were nabbed by the NAPTIP’s Rapid Response Squad in the early hours of Saturday after a tip-off.

It was gathered that Ayo, a mechanic working in the Zuba area, hails from Kogi State.

It was said his two-year-old son, who was usually starved, had sneaked into the kitchen last week and eaten one wrap of moin-moin (beans cake) left in a pot.

Our correspondent learnt that no sooner had he started eating than Khadijat arrived and allegedly brutalised him.

It was gathered that the two-year-old boy was from Ayo’s first marriage, which ended less than six months ago.

Rapist gets harsh penalty for biting victim’s private part in…

Man accuses LASTMA officials of stealing his N170k after extorting…

The little boy allegedly had his hands, buttocks and genitals burnt by his stepmother, who reportedly connived with her husband.

The couple were thereafter arrested and detained in the agency’s cell in Abuja.

The NAPTIP Head, Press and Public Relations, Josiah Emerole, who confirmed the arrest, said the agency would charge the couple to court after the holidays.

Emerole said, “The boy had faced maltreatment, including starvation, since the father forcefully took him away from his biological mother. The little boy was starved from morning till 2pm on that day and he crawled to the kitchen where he saw some wraps of moin-moin and decided to help himself to one of them.

“For that offence, the woman grabbed the little boy, held his hands and dipped them in boiling water. She also burnt his genitals. The boy’s screams attracted neighbours who came to his rescue, while one of them reported the matter to us.

“He has gone through a successful surgery at a specialist hospital in Abuja through the support of some Good Samaritans.

“The couple are now in NAPTIP’s custody, making useful statements while investigations continue. The Director General, Julie Okah-Donli, has ordered that the  suspects will be brought to justice.”