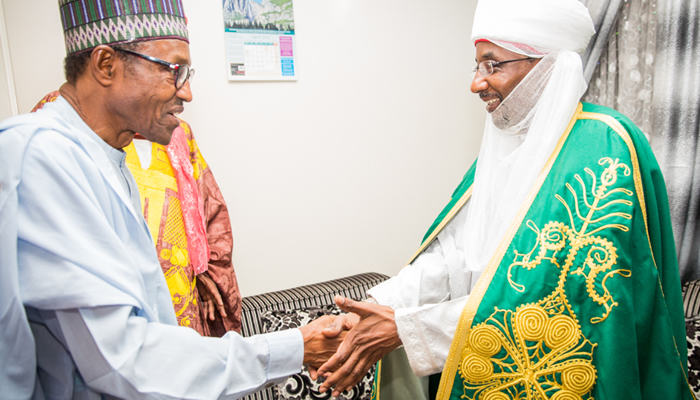 Fulanis are not terrorists — Emir of Kano, Sanusi

The Emir of Kano, Alhaji Sanusi Lamido Sanusi II has declared that Fulanis are not terrorists or criminals as perceived by some Nigerians.

Sanusi made the declaration at the weekend in Minna at a National Executive Council meeting of Miyetti Allah Cattle Breeders Association of Nigeria (MACBAN) attended by Lamido of Adamawa , Muhammadu Barkindo Musdafa, Professor Ango Abdullahi, Dr. Aliyu Tilde and other stakeholders.

According to him, Fulanis are Nigerians who are law abiding citizens that respect the constituted authorities in the country.

He urged Nigerians to avoid ethnic profiling whenever a crime is committed by persons of certain tribe saying criminals have no tribal marks.

The meeting was held with the leadership of various Fulani socio-cultural groups such as Miyetti Allah Cattle Breeders Association (MACBA), Miyetti Allah Katul Houre and Gan Allah Fulani Development Association as a means to find way of ending the recurring violent clashes involving and other Nigerians across the country.

The Emir urged the various Fulani associations to identify criminals within their midst for prosecution and called on the herders to imbibe the culture of patient and perseverance even in the face of provocation.

Emir Sanusi urged stakeholders to also liaise with state governors of Niger, Kogi, Nasarawa and Kano who have indicated interest to allocate grazing reserves with a view to developing them.

The Zonal Chairman of the National Executive Committee of Miyetti Allah Cattle Breeders Association(MACBA), Alhaji Gidado Siddiki said state governors to emulate are Governors Willie Obiano and Ifeanyi Ugwuanyi of Anambra and Enugu states who have been able to effectively stem the recurring clashes between farmers and herders while their others and the federal government were at a loss on how to begin.

He said that the two southeast governors were open-minded in their approach to tackling the clashes adding that through stakeholders meetings which included the leadership of the herders associations, farmers unions, traditional rulers and community leaders across all the local government areas in the affected states, they were able to understand the causes of the clashes and found amicable ways of addressing them.

Siddiki averred that the measures, which have worked in stemming the tide of violent conflict among herders and farmers in the two states should serve as models to other governors.

“Conflict between herdsmen and farmers has a long history; the solution has been to engage all stakeholders to find an amicable of resolving such,” he noted, even as he called on politicians to avoid exacerbating the conflict for selfish reasons.