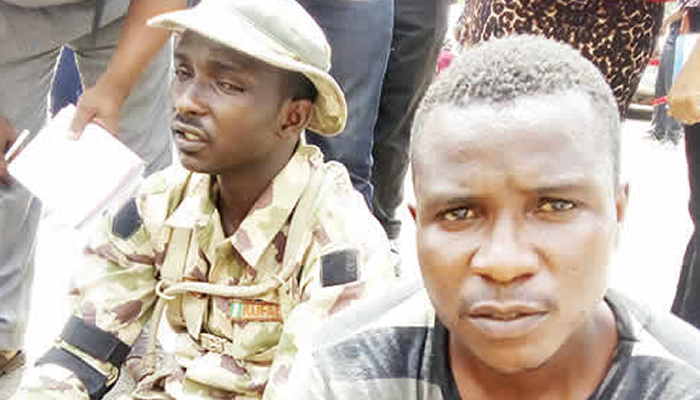 200-level student arrested for impersonating a soldier, possession of drugs

Luck has run out on a student at a Lagos private university, Ahmed Hassan, after allegedly parading himself as an officer of the Nigerian Air Force for months.

Hassan, a 200-level student of Architecture, was arrested with an accomplice, Ibrahim Yahaya.

It was learnt that Hassan and Yahaya, a commercial motorcycle rider, met in the Sabo area of Ikorodu, where Hassan made the rider to believe that he was an Air Force Flying Officer.

It was gathered that Yahaya consequently became his errand boy and assisted him in buying hard drugs.

He, however, met his Waterloo on January 30, when he asked Yahaya to bring 11 packs of codeine and a pack of Rohypnol to his school.

The police reportedly caught the motorcycle rider as he was about to enter the school premises.

Yahaya led the operatives to the Igbogbo area where Hassan was arrested.

Nigerian Lovers arrested with N489m worth of illicit drugs in…

When paraded at the Lagos State Police Command headquarters, Ikeja, 26-year-old Hassan told newsmen that he got the uniform from a military friend.

He noted that he wore the uniform to intimidate the school guards.

Hassan said, “I am from Kaduna State and I am a 200-level student of Architecture at Caleb University. I got the uniform from my friend, Rufai. I took codeine and Rohypnol in school. I impersonated a military officer in order to intimidate the security men at the school gate so that they won’t check a bag where I keep the drugs. I don’t sell them.

“Three weeks ago, a soldier, Sulyman, accosted me in Sabo. He is a lance corporal. When I told him I was a Flying Officer from Marafa, Kaduna, he (the soldier) saluted me and asked me to go.”

Yahaya said he didn’t know Hassan was a fake military officer until he was arrested.

He explained that Hassan had told him to collect some fruits from a man in Sabo on the day he was arrested.

He stated that he was surprised when security men at the school gate checked the polythene bag containing the fruits and found the drugs therein.

He said, “We met about eight months ago at Sabo. One day, the police arrested me and seized my motorcycle. He talked to the policemen and they released it. There was also a night that two police patrol teams came to raid a clubhouse in Sabo. He identified himself as a Flying Officer and he got the boy released instantly.

“About two weeks ago, he called me on the telephone and asked me to collect something from a man in Sabo and bring it to his school. The man gave me a polythene bag containing oranges and apples.

“When I got to the school, some policemen at the gate checked the polythene bag with me and found 11 packs of codeine and a pack of Rohypnol there. I never knew I was carrying drugs.

“I called him on the phone and we agreed to meet somewhere in Igbogbo. The policemen followed me to the place and he was arrested. They asked him to identify himself, but he could not. That was when I knew he was a fake military man.”

The Lagos State Commissioner of Police, Edgal Imohimi, said the command would liaise with the military to arrest Hassan’s collaborators within and outside the military formations.

The spokesperson for Caleb University, Mr. Elvis Otobo, asked our correspondent to send a text message and promised to respond accordingly.

He said, “Text me the (suspect’s) name and the details and I will get back to you.”

He had, however, yet to respond to the text message and a reminder, while subsequent calls to his line rang out.