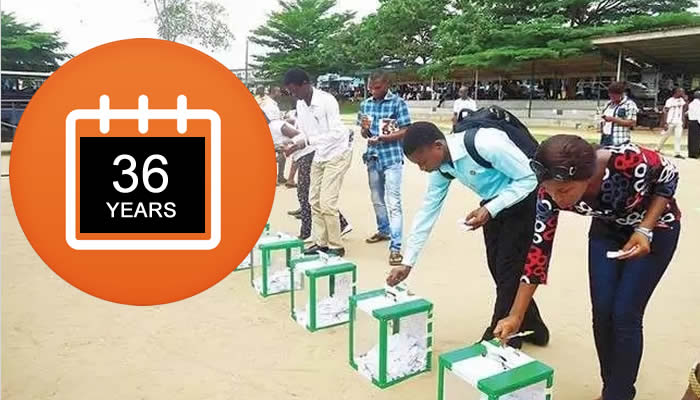 INEC releases elections dates for the next 36 years

On Wednesday, The Independent National Electoral Commission (INEC) announced dates for general elections in the country for the next 36 years, starting from 2019 to 2055.

INEC Chairman, Prof. Mamood Yakubu, made the announcement at a consultative meeting with leaders of political parties in Abuja.

He pointed out that in other democracies of the world, periods of elections are generally known and are not topics for speculation.

Yakubu explained that the aim was to engender certainty in the election calendar and also to allow for long-term planning by the commission and all stakeholders.

He said that certainty in election calendar was necessary to match Nigeria’s democratic system with global best practices.

The chairman said that in the last one week, INEC had received 108 applications from associations seeking to be registered as political parties.

He said that 66 of the applications did not meet the initial requirements, while 33 passed and had proceeded to the next stage.

He said that nine others were at the final stage of registration.

The INEC boss commended political parties for the roles they played in the governorship and National Assembly by-elections in Anambra, which ensured that the exercises were crisis-free.

He urged all existing political parties yet to comply with all relevant sections of the constitutional requirements necessary for their existence, to do so.

He advised the parties to ensure rancour-free conventions and congresses ahead of 2019 and the Ekiti and Osun governorship elections later in the year.

“Internal party democracy is critical to the overall success of the elections and it helps to eliminate some protracted litigations.

“Less than a year to the 2019 general elections, there are still cases in courts challenging the nomination of candidates in the 2015 elections,’’ he said.

Yakubu urged the parties to support the commission in its quest to sanitise the voter register by drawing the attention of the umpire to any irregularity.

He said with little or no financial support, political parties have been at the forefront of voter sensitisation to the need to conduct themselves responsibly at polling units.

Nalado commended the commission for creating an enabling environment for free and fair elections by rolling out election calendar in good time.

He added that the political parties were happy with the position of INEC on the sequence of elections, saying the commission acted on the existing law.

He welcomed the newly-registered political parties to IPAC and urged INEC to support the council’s plan to amend its code of conduct.

According to Nalado, the amendment will address issues of internal democracy and conflict resolution system, among other issues affecting political parties in the country.

Woman seek divorce after husband hired Alfa to sleep with her for 3 days, for money rituals