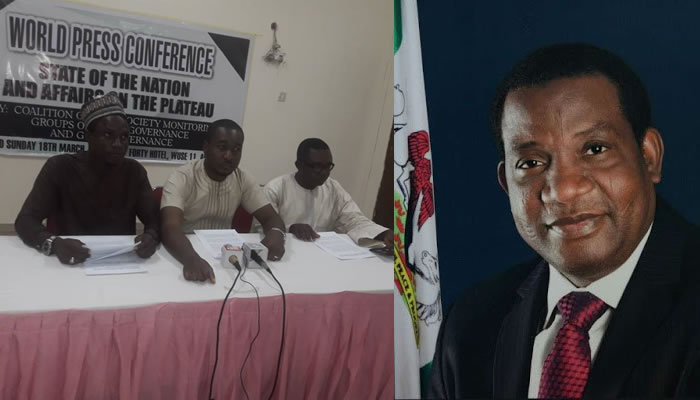 Following their recent tour of Plateau state for projects evaluation across the state, the Coalition for Monitoring Good Governance and Assessment in Nigeria, COMGAN, has returned with a verdict that Governor Simon Lalong-led administration in Plateau has delivered on its mandate on various projects.

The group, comprising independent CSOs, observed that Governor Lalong has focused on activities that directly touch on the life and wellbeing of the people of the state, adding that “of particular interest is the turnaround that has seen a boost in the agricultural output of Plateau state with produce from the state being readily found in other states of the country”.

In a statement issued on Sunday by its Executive Director/ National President, Comrade Ikpa Isaac, COMGAN scored Lalong high in the areas of transparency and accountability, which “he has adopted as standard to be followed anyone connected to the government in that state”.

Isaac reasoned that the quality of work done by the governor was made possible by his zero tolerances for corruption in government business, adding that projects executed under Lalong’s watch are of world standard in testimony that he has the interest of the Plateau people in mind.

Explaining that its evaluation visits would eventually cover all states of the federation, the coalition explained that Plateau state was included in the first phase of state because of its focus on states that have in recent times experienced one violent crisis or the other.

It pointed out that places that have experienced such security issues are usually challenged in terms of service delivery, especially when scarce resources have to be diverted to beefing up security in the state.

COMGAN went on to regret that some persons “have resorted to playing politics with the achievements that have been recorded in Plateau state by seeking to create the impression that there is nothing that has been done by the incumbent state government.”

Part of the statement read, “This development is something we would have ignored and focus on our work of assessing the extent to which elected officers are able to deliver good governance to their constituents but for two reasons. One, it is dangerous for highly placed persons to lie about the performance of a government as done by the Minister of Youth and Sports Development, Solomon Dalung did. Secondly, failing to exposed lies about the performance of an elected officer may discourage others from delivering on their mandate.

“The impetus for Dalung’s action may not be unconnected with the promise he reportedly made to his inner circle to ensure that the All Progressives Congress, APC, loses election in Plateau state because of his humiliation at the last general elections. He has every right to seek political outcomes that suit his desire but his lack of fair assessment on what the state government has achieved is condemnable.

“In case he is not awake to the reality of what he has done, our coalition is telling Solomon Dalung, in clear terms, that he is threatening the peace of Plateau state and that of Nigeria as whole. He would be held accountable for any breach of the peace arising from his attempt to provoke violence by instigating people.

“In our opinion, the kind of people that will lie about a governor’s performance in office simply to score cheap political points are dangerous to the polity. It is on record that Dalung has remained embittered since failing to become Plateau state governor but even this is not enough justification to lie about what is happening in his state. The kind of lies he told are capable of sparking strife that would lead to loss of life.

“The claims made by Solomon Dalung do not only conflict with the realities on ground in Benue state but also present his party, the APC, as running a corrupt government. This is worrisome knowing that the government of President Muhammadu Buhari has anti-corruption as one of its cardinal goals.

“We hope President Buhari will take this as the final call to question Dalung’s place on his cabinet since it is apparent that the minister has no desire to see the anti-corruption efforts succeed.

“Whatever animosity Dalung has against President Buhari is deep seated to the point where he practially called Mr. President, a retired general, stupid by implying that he was deceived about the security situation in the state. Coming at a time the president had just visited the state, this unfair portrayal of the President as being undiscerning is further an insult to Nigerians.

“Since we know from our field work that Governor Lalong has performed creditably well within the resources available to him, we encourage him to do more so that other governors would be challenged to emulate his approach of completing existing projects before moving to new ones. Because we also know that there has been significant improvement in the security situation of the state, we appeal to the governor to ensure that the peace is maintained.

“He must however be on alert to ensure that the minister’s loyalists do not sabotage the state under his (Lalong’s) watch since that could be the next line of action to expect from his desperate bid.

“We urge the good people of Plateau state and other stakeholders to cooperate with their governor and support him to achieving more than he already did. We appeal to them to task anyone making spurious claims about how the state is being run to provide evidence.”