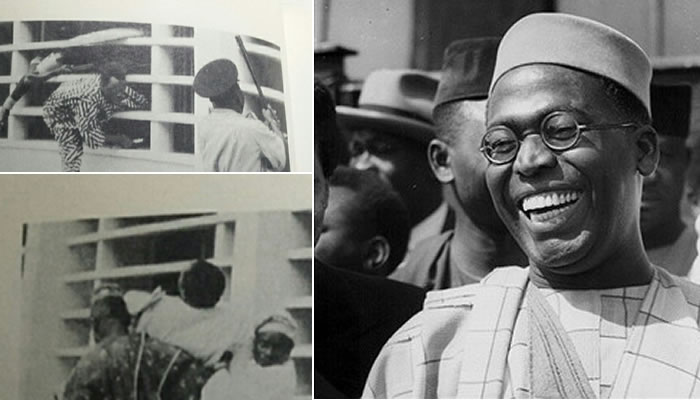 Operation wetie was the name given to the series of riots that characterized both the political and civilian scene of the defunct Western Region of Nigeria in the 1960s.

Operation wetie, in the context of the crises, means to douse or wet politicians, their properties and supporters with petrol and set them ablaze. The background of the riots is traced to the 1962 Action Group crises which was a result of the struggle for power between two political leaders of the Western Region and Action Group (AG), Chief Obafemi Awolowo and Chief Samuel Akintola.

The bloody riots started with an intra-party disagreements between the leader of the Action Group, Chief Obafemi Awolowo, and his deputy, Chief Samuel Ladoke Akintola.

The first open head clash between Obafemi Awolowo and Samuel Akintola was in 1961 when the latter went on an economic mission to Europe. The quarrel occurred when Chief Akintola rejected the men Chief Awolowo nominated for the mission and substituted them with the men of his choice. Obafemi Awolowo tagged the incident disrespecting but allowed it to pass by without drawing members of the party into a fight.

After the mission nominees scuffle, the two leaders got into another disagreement when Samuel Akintola dismissed the old board members in Western Nigeria’s public corporations like the printing corporations, the housing corporation, the radio and tv corporation, and replaced them with his own nominees.

As the premier and leader of the Action Group’s parliamentary, Samuel Akintola felt he has the right to do what he did. Another factor that caused the 1962 Action Group crises was the difference in ideology. A faction of the Action Group suggested that the party should drop its ideology of democratic socialism which called for the introduction of mixed economic policies while another faction insisted it should be retained.

This caused serious uproar and unrest in the Western Region which later resulted to chains of violence. Several people were killed and properties worth millions were destroyed in days. Shortly after, a state of emergency was declared throughout the Western Region and Adesoji Aderemi was sacked as the Governor while Dr. Moses Majekodunmi (the Federal Minister of Health) replaced him as Administrator (interim premier of the Western region) on the 29th of May, 1962.

This became the first time in the history of Nigeria that a state of emergency would be employed to curb violence. Political opponents and their families were set ablaze, and their properties too, some of which were looted. Hundreds of vehicles and houses were razed in the riots tagged operation wetie which left many people dead and incarcerated. The whole of the Western Region was indeed thrown into a state of anarchy.

However, on the 31st of December, 1962, Chief Samuel Akintola returned to power as the Premier of Western Region after an alliance between himself and Ahmadu Bello who was the Premier of Northern Region. It was alleged that their alliance earned Chief Obafemi Awolowo a ten-year prison sentence on the count of treason.

And when the parliamentary election came in 1964, the Nigerian National Alliance (NNA) won with a total of 198 seats out of 312 seats and out of the 198 seats won by NNA, NPC held 162 while NNDP of Akintola claimed 36 seats. It is worthy of note that the election was massively rigged. When the manipulated results were announced, unprecedented violence sparked off in the Western Region of Nigeria. Several people were killed daily and countless properties were destroyed too. This is one of the major factors that brought in the first coup in Nigeria on January 15 1966.