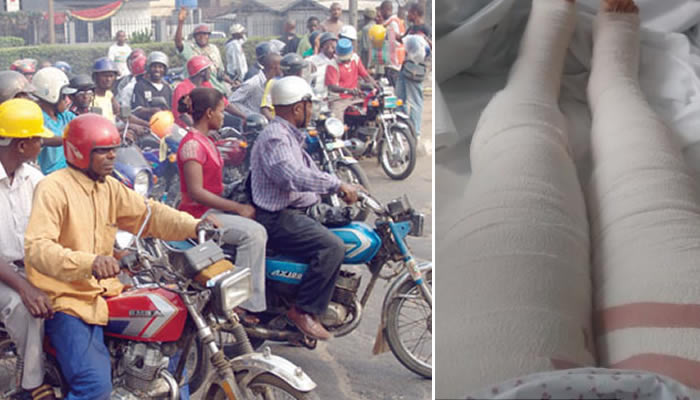 A trader in Akala, Mushin, Lagos State, Toyin Busari, is battling with burns after her lover allegedly poured substance suspected to be acid on her body.

The 27-year-old, who is on admission at the Lagos State University Teaching Hospital Annex, Gbagada, was reportedly accused by her boyfriend, Lukman Madoti, of infidelity.

Madoti, who is said to be the chairman of okada riders in the area, was arrested by the police from the Alakara division.

Our correspondent learnt that there had been a series of fight between the lovers since they met about a year ago over allegations of unfaithfulness.

Another disagreement reportedly ensured between them around 10pm last Sunday after Busari returned from her hometown in Eruwa, Oyo State, where she had gone to check on her ailing mother.

He was said to have beaten her up and seized her phone, but some residents later settled the quarrel.

It was gathered that Madoti broke into her room around 5.30am the following day and poured acid on her while she was asleep.

He was fleeing from the scene when he was allegedly caught and beaten up by a mob before he was handed over to the police.

A community leader, who did not want his name in print, said he was going to the community mosque for Subhi (5.45am prayer) when he met Madoti hurrying towards Busari’s house.

He said, “He hid his face and did not greet me. Since I had no business with him, I didn’t bother to call him. He put on hooded black clothes. It was when I finished praying that I learnt that he poured acid on his girlfriend.

“A woman that was sweeping outside said he nearly pushed her while fleeing. He plastered a moustache and beards to disguise. He confessed that he did it after he was caught.”

A neighbour of the victim, who gave her name only as Taiye, said she was woken up by the screams from Busari’s apartment.

“She complained that her body was itching. By the time we got to the hospital, her skin had started peeling off,” she added.

Another resident, who gave her name only as Rasheedat urged the police not to sweep the case under the carpet.

Busari, who spoke to newsmen from her sickbed, said Madoti had serially subjected her to harassment on the claim that she cheated on him.

She said when the abuse persisted, her mother told the two of them about two weeks ago to quit the relationship, but he refused.

She said, “He had been complaining that I was cheating on him, whereas he had never caught me with another man. People advised him not to rely on rumours, but he would not listen. He always beat me up because of jealousy. He had vowed to destroy my beauty. Around 5.30am on Monday, he entered my room and poured acid on me. I never knew he meant his threat.

“On the average, we buy N15,000 drugs on a daily basis. I am pleading with Nigerians to assist me,” she added.

The Lagos State Police Public Relaions Officer, SP Chike Oti, said, “The victim is recuperating at the hospital. The suspect is also in a hospital. He was attacked by a mob after the incident.”

Police arrest Okada rider for allegedly abducting a woman, raping her and beheading…

Tears as vehicle crushes okada rider to death in Ondo