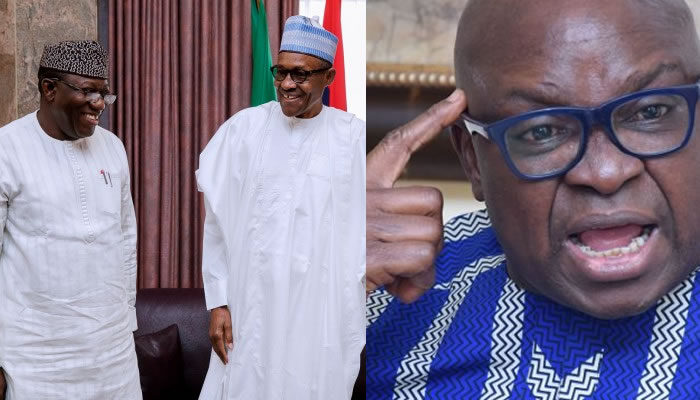 The Ekiti State Governor, Ayodele Fayose, on Friday accused the All Progressives Congress (APC) of conniving with the Independent National Electoral Commission (INEC) to rig the July 14 governorship election in the State by, “Using students of the Federal University, Oye Ekiti (FUOYE) as INEC ad-hoc staff for the election, instead of youth corps members.”

Fayose alleged that the Vice Chancellor of FUOYE, Prof Kayode Soremekun, was a card carrying member of the APC and a close ally of the party’s candidate, Dr. Kayode Fayemi, hence the plan to use the Professor to rig elections for APC.

Addressing journalists in Ado Ekiti, the state capital, the governor said, “The idea behind this plot is to recruit APC members from neighbouring States, arm them with FUOYE students’ Identity Cards and use them as INEC Presiding and Returning Officers to perfect the planned rigging of the election. This will fail.

“Recall that the President said categorically that Ekiti State must be taken by the APC at all cost. Instead of his empty boast that his party must capture the State by whatever means, the President should rather tell Ekiti people what he has done for them in the last three and half years.

“Today, we are beginning to receive signals to the effect that clandestine moves are being made to subvert the will of Ekiti people.
With the failure of their “Ondo Option”, other evil means are now being devised.

“Despite that, we have over 9,000 youth corps members in Ekiti State and it has been the general practice to engage the NYSC members in elections across the country. The APC in collusion with INEC has asked that students of the Federal University, Oye Ekiti (FUOYE) be recruited as INEC ad-hoc staff for the election, instead of youth corps members.

“We are in possession of an Internal Memorandum from the office of the Dean of Students Affairs, FUOYE, seeking registration of students of the University as INEC Presiding and Returning Officers for the election.

“As I speak, over 2,000 supposed FUOYE students have been registered; with a curious condition that they should provide Bank Account details
of their close relations, apparently to avoid tracing any payment into their own accounts.

“The question is; with over 9,000 Youth Corps members in Ekiti State, what is the need for FUOYE students in an election that is holding in less than 2,200 polling units?

“Our counsel is that parents, guardians and families of FUOYE students should prevail on their wards to shun this Greek gift and avoid being used by desperate politicians.

“INEC too, must come clean on this. The electoral umpire must tell the public the rationale behind the plot to jettison youth corps members for supposed FUOYE students.”