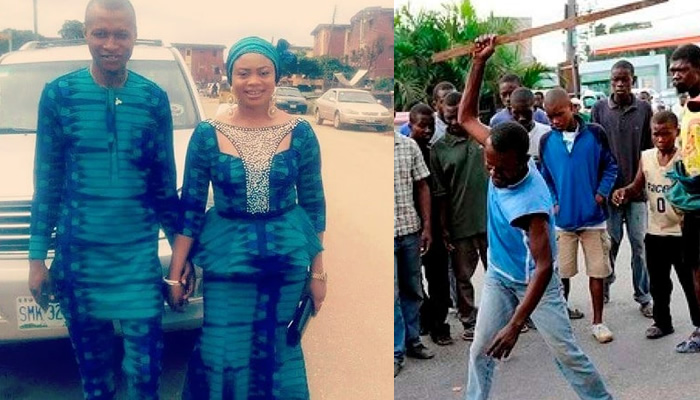 Video: Mob pounce on Man who killed fiancée because another man picked her call

The man who murdered his fiancee and deposited her corpse in a bin in Oshodi, Lagos, is believed to have killed her because another man picked her call while he was away on a journey.

At about 4am on Monday, he dragged the sack containing the body of his wife to go and dump it but on his way he was accosted by some youths.

The suspicious youths asked what the content of the sack was but the suspect ignored them.  An Islamic cleric passing by then opened the sack and found the corpse. At this, the mob pounced on the suspect and beat him to a pulp.

Watch the video below..

Man who killed his fiancée because another man picked her call attacked by angry mob in Lagos pic.twitter.com/BuYQhSCl2R

Residents who spoke to newsmen on Tuesday said they were shocked because the couple lived together peacefully. Friends of the deceased said Joy adored Chukwu and spoke fondly of him.

‘I was not attacked by Ohaji/Egbema youths’, says Uzodinma

Narrating what happened, the suspect said:

I travelled on Thursday to attend a burial in Abraka, Delta State. I left Abraka the following day for my hometown in Ebonyi State. I called my wife around 11pm to know how she was faring. We exchanged pleasantries.

On Monday (after he returned), as I was going to take my bath, I saw the corpse.

Isaiah Chukwu, 35, a spare parts dealer in Ladipo, Oshodi, lived with his 26-year-old lover, identified only as Joy, in a house on Balogun Street, Oshodi. Though not married, Chukwu and Joy, both indigenes of Ebonyi State, had been living together for the past two years.

Man rejoices over the death of Uwa Omozuwa, says she was dating two roommates